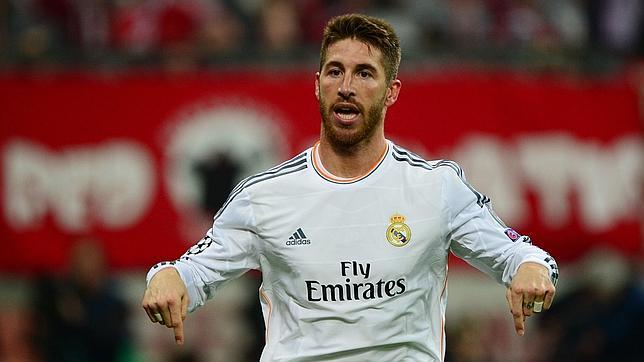 Ancelotti pondering Ramos at right-back for the derby

With Carvajal out, the Italian is thinking of playing Varane and Pepe in the middle and Ramos out wide.

Ancelotti is thinking about playing Ramos at right-back against Atleti. The injury to Carvajal has led to him weighing up replacing him with a player, like Ramos, with the same attacking presence at the same time as giving the defence more aerial power. Arbeloa, the same height as the ex-Sevilla man at just over six feet, has less capacity going forward.

Ancelotti has only used Ramos as a number ‘2’ once, on 6 November last year in Turin (2-2). He said at the time: “He’s a central defender but the team needed it. Juve sent a lot of balls to the back post and he did well. It’s provisional. I know he likes playing in the centre”. He was right about the player’s preferred position, with Ramos having given up playing out wide some time ago.

It was Sacchi who convinced Florentino to sign Ramos, in 2005, for 27 million euros (“for his versatility”). He had shone as a right-back in the lower ranks at Sevilla, though Caparros used him sporadically as a central defender.

In his first season in white (with Luxemburgo and López Carro) he didn’t play out wide once (Diogo, Salgado and as of January Cicinho played there). He did though play in the midfield eight times. “That’s where his future lies”, Sacchi would say to Florentino. Ancelotti did try him there, in his first Clásico. The experiment didn’t go well. (Madrid lost 2-1).

The debate over whether to use Ramos in the middle or out wide was a recurring theme under every coach, until Ancelotti came in – under him he’s always played in the middle. With Capello and Schuster, Ramos played more out wide with the occasional appearance in the centre. Pellegrini moved him back and forth, but back then Ramos, who had still to win the World Cup as a right-back, had rejected the position: “The last time I play as a right-back will be the World Cup”.

Mourinho though also didn’t listen to him, often playing Pepe-Carvalho in the centre, until Carvalho got injured and allowed Ramos to claim the centre-back position with his fine performances. There he played three Champions League semi-finals under Mou and won the European Championships in 2012. Now his position isn’t in doubt. “He’s a centre-back” says Ancelotti, but his versatility still gives the coach options, which he’s now tempted to use…