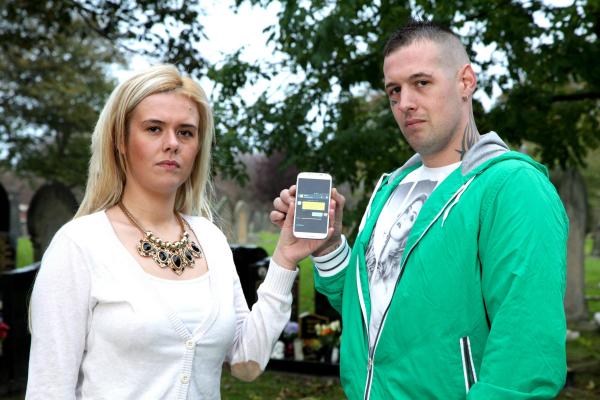 Text from Beyond the Grave…..

A family were shocked to receive text messages from their dead grandmother who had been buried with her mobile phone three years earlier. Since her grandmother Lesley’s death, Sheri Emerson, 22, had been sending messages to her phone to help comfort her. The family had buried the 59-year-old with some of her favourite possessions, including her phone, and thought operator O2 had terminated the number.

But Ms Emerson was left in shock when a reply flashed up on her phone, saying: “I’m watching over you and it’s all going to get better. Just push through.”

This was followed by a second message after she asked who it was, saying “a disturbing vegetarian”. She said: “I felt sick when I read it. I was in shock and didn’t know what to think. “Obviously we know that Nan wasn’t ever going to reply to our texts. It was just something we did as a comfort for ourselves, because she loved to text.”

Her uncle, Graham Emerson, eventually rang the number and they discovered it was a man who had been using the number for a few weeks.

He apologised and explained that he thought the texts were hoax messages from friends and he had been given the number by giffgaff, a different phone company.

O2 said it had not sold the number on, but if a number is disconnected it is placed in a general pool of numbers for recycling.

The company said its bereavement team should have explained this and apologized if the family had been told anything different.

A spokesman said: “We’ve been in touch with Mr Emerson to explain the situation and apologized for any distress this is causing him and his family. He is very grateful for our support and understands we are doing all we can to help.”

THE family of a victim of a US train crash received 35 calls from his mobile phone throughout the night of the accident.

There was nothing but static on the other end of the line, but Chuck Peck’s fiancee used these opportunities to shout encouraging messages into the phone like “hang in there baby. We’re gonna get you out. You’re gonna be okay.”

The authorities managed to trace one of the calls which lead them to the first train and eventually to his body. Unfortunately, Peck died on impact.

SIMMA Lieberman’s boyfriend, Johnny, was a mellow hippie “who loved everybody,” a guy so nice that friends called him a pushover.

One night, while she was at her mother’s home in the Bronx, the phone rang and she answered. Johnny was on the line, sounding rushed and far away. Static crackled. “I just want you to know that I love you, and I’ll never be mean to anybody again,” he said. There was more static, and then the line went dead. Lieberman was left with just a dial tone. She tried to call him back to no avail. When she awoke the next morning, an unsettled feeling came over her. She found out why later. “Several hours later, I got a call from his mother that he had been murdered the night before,” she said.

He was shot in the head as he sat in a car that night. Lieberman thinks Johnny somehow contacted her after his death across telephone lines.

Some time after his death Jack’s best friend, Tim Hart, received an email message from his best friend from beyond the grave.

He said: “One night in November, I was sitting on my couch, going through my emails on my phone and it popped up, ‘sender: Jack Froese.’ “I turned ghost white when I read it…It was very quick and short but to a point that only Jack and I could relate on.”

The subject of the email was “I’m Watching,” and the message read simply “Did you hear me? I’m at your house. Clean your f***ing attic!!!”

Tim understood what this message meant, as a week prior to Jack’s death, Tim and Jack had come up into his attic and Tim had told him he was planning on giving it a thorough cleaning. Tim thought it needed a good sweeping, because everything was dusty.

One would think that one email from the grave might be enough, however yet another close confidant of Jack’s received an email message, namely his cousin Jimmy McGraw.

The email was also short and pointed, and simply warned him about breaking his ankle, which happened after Jack had passed on.

Jack’s mother simply said that you can either ‘take it as a gift,’ or dismiss it. Others who received emails from Jack from beyond the grave apparently weren’t as happy as Tim was to receive an email from him and chastised the unknown ‘culprit.’ There are allegedly some services which will send emails automatically after a certain time period has elapsed past death.

The system uses a check-in method which has the email user check-in periodically, when the member doesn’t check in for a set period of time, the pre-written emails are sent out.

In Jack’s case, that would have required some foreknowledge of his death as the topics he emailed people about were all recent events.