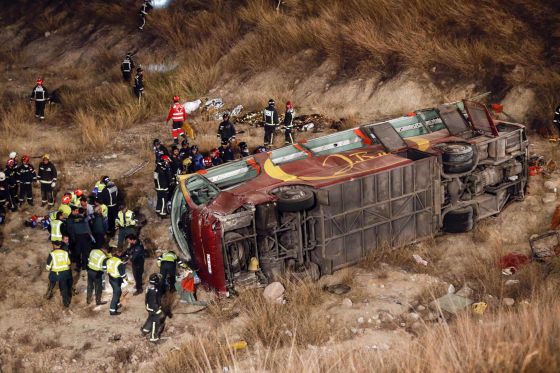 Speeding likely cause of bus crash

Investigators believe that excessive speed was likely to blame for a bus crash that killed 14 passengers and injured 42 others in Murcia on Saturday night.

The coach, which was on its way back to Bullas (Murcia) from Madrid, veered off the road on a curve and tumbled down a 20-meter bank, turning on itself before coming to a crashing halt, said Civil Guard sources.

The passengers were all residents of the same small town, Bullas, population 12,200. They had gone to Madrid on a pilgrimage to pay their respects to Mother Maravillas, a Catholic saint who was born in Bullas. The trip had been organized by the local parish, whose priest also died in the crash.

Around 100 locals had signed up for the one-day trip, and travelled on two coaches.

The accident took place at around 11.20pm on the RM-714 road near Cieza, just a short distance from Bullas.

The driver has been charged with involuntary manslaughter and reckless driving, although early reports said some passengers heard him cry out “I can’t brake! I can’t brake!” right before the crash.

“We are still analyzing the causes,” said the government delegate in Murcia, Joaquín Bascuñana. “On paper, everything seems like it was perfect: the drivers had switched a half hour before, the new driver had ample experience and no blots on his driving record, no points lost on his driver’s license, no accidents. He tested negative for alcohol and drugs, and the vehicle had undergone a technical check-up (ITV) only two days earlier.”

But it has emerged that the same vehicle was involved in an earlier accident in 2010. Photographs of that incident made public by several digital media outlets show the same license plate, even though the body paint is different. Back then, 15 people were injured when the coach keeled over after the driver reportedly had a problem with the brakes. The fact that he was travelling at slow speed prevented serious injuries.

Sources at the auto body shop that repaired the bus have confirmed it is the same vehicle involved in Saturday’s deadly crash. The owner of the bus company, José Ruiz, answered the phone to EL PAÍS but hung up when he heard the questions, and refused to pick up again afterwards.

The king and queen of Spain attended a funeral Mass held at 11am inside the sports arena in Bullas, where over 1,200 people joined Felipe VI and Letizia to express their condolences. Interior Minister Jorge Fernández Díaz was also present.