I love a happy or Hollywood ending. I reported last week that a stray dog took a drink from a mug and how the teeth contained in the mug became lodged in the dog´s mouth as it ran away. Thus leaving the dog with a permanent lop-sided grin and a curious clatter, clatter sound when it barked.

The good news is that the dog handed, or pawed (Pawed. Gedditt?) itself in and the teeth were returned to their rightful owner. In gratitude the owner of the teeth, who wishes to remain nameless, found a new home for the dog.

Makes you feel good all over don´t it? No? Oh well, on with the game.

Due to the violent whirlwind, rain, sleet and snow that descended on Los Gallardos on Sunday play was stopped after only a short while.

The reality is that there were a few spots of rain but I can´t resist a bit of drama.

Let me explain. As usual the group took turns to pull either a black or white counter from the hat. Black for “Coffin Dodger” and White for “Seizure Stopper.”

It was decided that due to the hugely inclement and `orrible weather the White or Black tee shirts normally worn would not offer enough protection against the tremendous and violent storm, so the Coffin Dodgers used Umbrellas and the Seizure stoppers used long raincoats. They now became the Brollies vs The Macs. 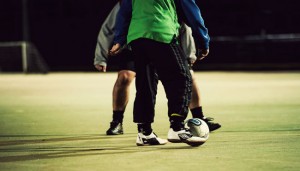 After hearing aids, spectacles and false teeth were collected referee Vicko blew his whistle and the game began.

At first the intentions of both teams seemed good but it quickly descended into the usual mayhem. Team Brollies soon realised that by clever manipulation of their Brollies they could surreptitiously pass the ball between themselves almost unseen by team Macs giving them an unfair advantage. To a certain extent the Macs could do the same as their raincoats were quite long.

By now referee Vicko had blown his whistle almost straight and the game came to an early end when team Brollies lowered their umbrellas and advanced on the Macs goal. For all intents and purposes they looked like a Phalanx of Roman infantry. If it were not for the pinks, greens and various other colours of the brollies it would have been a scary sight. As it was, everyone burst out laughing and both teams retired to the bar.

I doubt there will be another game this side of Christmas but we will start again in the New Year so I say again, if you think you´re hard enough then form a team of over 50´s and either send an email or contact the office on Camping Los Gallardos for a match. Talk is cheap! Actions speak louder than words you bunch of pussies. I can say that because I don´t play. TEE! HEE! TEE! HEE!

If they are no other challengers then, even though they are approximately half our average age, we will take on the staff here on Camping Los Gallardos.

If you and your local community feel like getting involved in a match or a league then get in touch with us at the Soltimes, and we will do our best to arrange something.