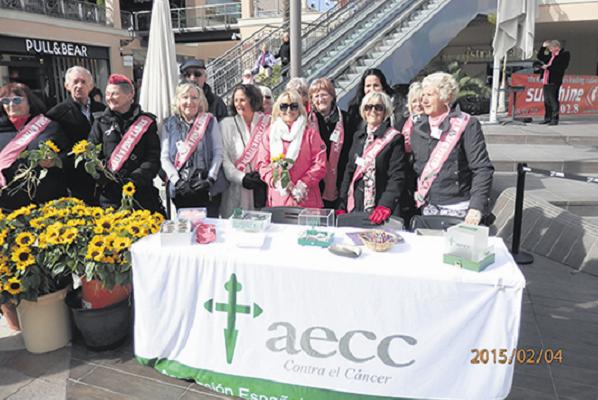 WORLD Cancer Day was again recognised by Maria and the Pink Ladies at Zenia Boulevard. Maria and her Pink Ladies/Panthers braved the bitter cold to raise much needed funds for the AECC early detection program and towards research into future cures.

The Ladies were handing out sunflowers donated by the Zenia Boulevard management to members of the warm hearted public who made individual donations totalling over 800€. At 13.00hrs, a minutes silence was held and 50 helium filled green AECC balloons were released in honour of all those who have lost their fight to this evil disease.

Helping to make the day enjoyable for the many members of the public that attended to mark the day, were some of the top entertainers on the Costa Blanca, and Maria would like to thank them, one and all, for once again donating their time to this very worthy cause.

Those that gave their time were Texas Ted, Paul Michael, Raquel Peñas, Flamenco for All, Nikki Gale, Robert Bonovox, Richie Alexander, Dan Davy, Gemma, Sammantha Curtis and Jay Markwick and his dancers. A special thanks to Stevie Spìtt for hosting the whole day and to Sunshine FM for their support on the day.

Allof which has been donated to AECC to help in the fight against cancer.