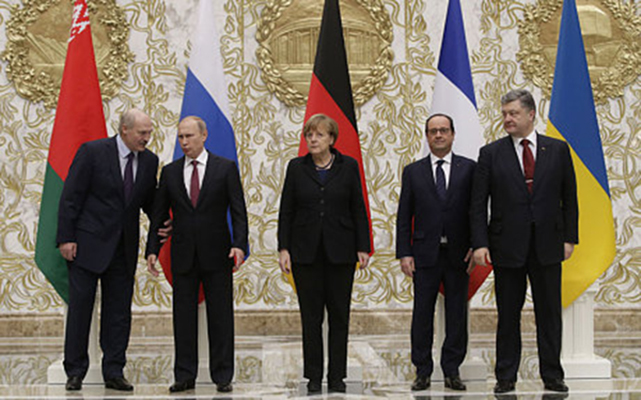 A deal aimed at ending the fighting in eastern Ukraine has been agreed, following marathon talks in Belarus.

The leaders of Russia, Ukraine, Germany and France announced that a ceasefire would begin on 15 February.

The deal also involves the withdrawal of heavy weapons from the front line, but some issues remain to be settled.

The pro-Russian rebels in eastern Ukraine have signed the agreement. Thousands of people have died in almost a year of fighting in the region.

French President Francois Hollande said he and German Chancellor Angela Merkel would ask their European Union partners to support the deal at a summit later on Thursday.

The agreement – reached after 17 hours of negotiations in Minsk – includes:

Ms Merkel said there was now a “glimmer of hope” but big hurdles remained.

Key unresolved issues include the status of Debaltseve, a government-held town surrounded by rebels that has been the focus of fierce fighting in recent days.

Further talks will also be held on self-rule in parts of Donetsk and Luhansk separatist regions.

Mr Putin told Russian television: “It wasn’t the best night for me, but it’s a good morning.”

Mr Poroshenko – who had accused Russia of making “unacceptable” demands – said that “despite tension and pressure” Ukraine had not succumbed to “ultimatums”.

The separatist leader in the Luhansk region, Igor Plotnitskiy, welcomed the agreement.

“We hope that thanks to our efforts today Ukraine will change and stop firing at civilians, hospitals and socially important facilities,” he said.