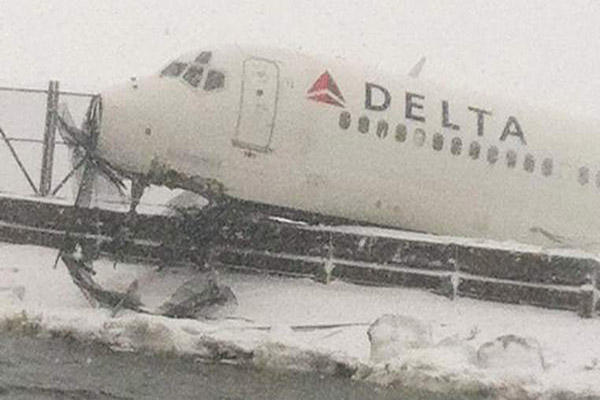 A passenger plane ended up just metres from the waterfront after crashing through a fence as it skidded off a runway.

The Delta Air Lines jet, carrying 127 passengers and five crew, veered off while landing at New York’s LaGuardia Airport during a snowstorm.

The nose of the aircraft ended up lying over the fence at the edge of Flushing Bay and all those on board Flight 1086 from Atlanta were evacuated.

Wearing coats and scarves, they left via escape slides and were seen walking through the snow where the temperature was around -3C (26F).

They were then transported by buses to a nearby terminal.

At least six people were hurt though authorities said the injuries were minor.

Authorities stressed it did not make contact with the water.

Sky’s New York Correspondent Hannah Thomas-Peter said: “One of the things that really scared passengers was that when they landed, there was so much water being pumped onto the aircraft by fire crews – because of fears of blazes – that many believed the plane had gone into the water.”

Passenger Naquithan Taylor said: “At first I didn’t even know what was going on. Then I realised it wasn’t going well when we hit a stop and saw water coming up and gasoline running from the wing.”

He said some flight attendants were “frantic” and “did not know what was going on” but “for the most part they kept their composure and made sure we were evacuated safely”.

Another passenger Jaime Primak, a blogger and publicist, wrote on Twitter: “We just crash-landed at LGA (LaGuardia). I’m terrified.”

In a second post, sent later, she wrote: “We have all been evacuated. Everyone is safe.”

New York Police said there was a “minor fuel spill” following the scare at 11.05am. Both the airport’s runways were closed.

“Customers deplaned from the aircraft safely and have moved to the terminal on buses.

“Our priority is ensuring our customers and crew members are safe. Delta will work with all authorities and stakeholders to look into what happened in this incident.”

One former pilot, speaking to Fox News, described it as a “short” runway, adding: “We always have to make sure we are right on with our air speed and our configuration.

“If you don’t hit it just right, you really do need to go around. Unfortunately, they may not have had the runway cleared properly.”