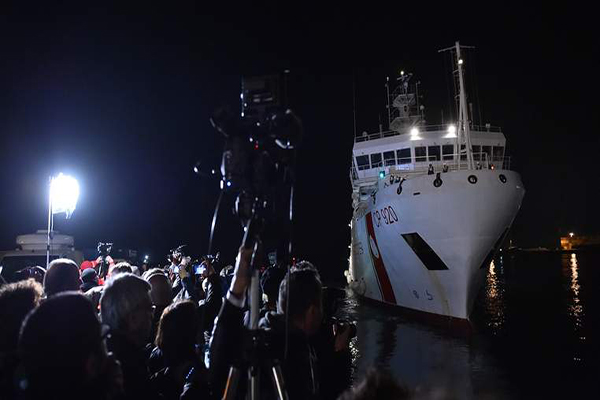 The captain and a crew member of the boat that capsized off the Libyan coast killing around 800 people have been arrested.

Italian police said the men were taken from a group of 27 survivors who arrived in the Sicilian port of Catania on Monday evening.

A Tunisian man, who is believed to be the captain of the vessel, has been charged with people trafficking and reckless multiple homicide in relation to the disaster.

A Syrian, allegedly a crew member, has been charged with people trafficking.

Body bags containing 24 corpses of those who drowned arrived in Malta earlier. There are fears hundreds more were locked in the hold.

EU leaders including David Cameron will meet in Brussels on Thursday to discuss a plan to tackle the crisis but Labour’s Ed Miliband has said the current proposals do not go “nearly far enough” and it will be “a stain on the EU” if proper action is not taken.

“We can say that 800 are dead,” said Carlotta Sami, spokeswoman for the United Nations High Commissioner for Refugees in Italy on Tuesday, after speaking to survivors.

Those who escaped with their lives described to officials the moment the 20m (70ft) trawler carrying them capsized after a Portuguese merchant ship approached the vessel, causing a stampede.

Ms Sami said: “There were a little over 800 people on board, including children aged between 10 and 12. There were Syrians, about 150 Eritreans, Somalians… They had left Tripoli at about 8 am on Saturday.”

Most of the survivors from Mali, Gambia, Senegal, Somalia, Eritrea and Bangladesh have been taken to nearby holding centres, while one was taken to hospital in Catania, on Sicily’s east coast.

EU foreign ministers meeting in Luxembourg produced a 10-point plan for dealing with the plan, but Save The Children blamed politicians for “yet more dithering”.

Gemma Parkin, who is working in Sicily for the charity, told Sky News EU leaders should immediately support the restart of search and rescue operations in the Mediterranean when they meet on Thursday.

She said: “These are women and children drowning. It’s becoming the new norm and any politician, in their retirement years, if they don’t make the right decision now, they’ll look back on this with grave regret.”

Former Foreign Secretary William Hague warned there was no “quick fix” to the problem and that the answer was not to relax immigration controls in the EU or UK.

As the search continues for victims of the weekend disaster, coast guard ships rushed to respond to two new distress calls.

The calls were made from an inflatable life raft with 100 to 150 migrants on board and a boat carrying about 300 people, said Italy’s Prime Minister Matteo Renzi.

Hours later it remained unclear how the Mediterranean rescue operations were going.

In a separate incident, at least three people, including a child, were killed when a boat carrying migrants ran aground off the coast of the Greek island of Rhodes.

With governments across the EU being urged to take responsibility, foreign ministers have agreed further measures to deal with the crisis, including a joint task force to track down traffickers and efforts to destroy the often poorly maintained and overcrowded boats they use.

At an already scheduled meeting in Luxembourg, they unveiled a plan which also involves doubling the size and funding of Triton, the Europe-wide border protection operation.

There has been a surge in migrants trying to reach European shores – usually Italy and Malta – as people flee conflict, repression and poverty in the Middle East and Africa.

At least 1,500 are believed to have drowned in the Mediterranean this year alone.