Rescuers have found a 15-year-old boy still alive in rubble in Kathmandu five days after the earthquake that has killed more than 5,500 people in Nepal.

Described on Twitter as a “miracle boy”, efforts to pull him from the rubble were reported live from the scene on BBC Five Live. An alert from the Associated Press news agency suggested he was later successfully freed.

The boy was discovered by a Nepalese search team working with a group of rescuers from USAID, who said he had been buried in the rubble of a collapsed home.

The American team’s leader, Andrew Olvera, said: “We have lights, we have generators, we have heavy breaching equipment, jackhammers, and we’re trying to get him out.”

He said the boy was not too far down, but the building’s seven floors had collapsed and “he’s pancaked between them”.

It comes after dramatic images emerged on of a very young baby who was pulled from the rubble after being trapped for 22 hours. 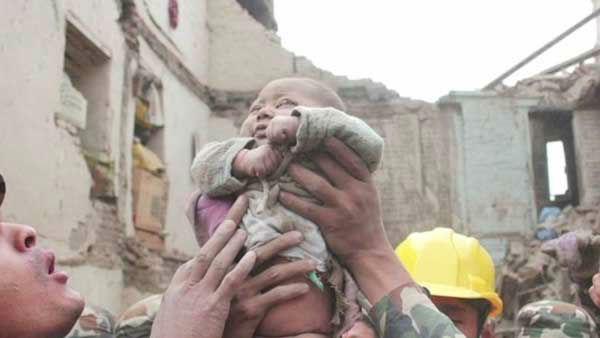 The latest death toll from officials suggests Saturday’s quake killed more than 5,500 people across several countries, including 5,489 in Nepal itself and 61 in neighbouring India and Bangladesh. Chinese officials say 25 people died in Tibet.

With around 11,500 people injured in Nepal and rescuers still struggling to reach some remote areas, it seems certain that more stories like that of the 15-year-old boy in Kathmandu – as well as others who were not so lucky – are going to emerge.

After the massive earthquake in Haiti that levelled Port-au-Prince in 2010, one father of two was pulled from the rubble after an extraordinary 27 days trapped in the rubble.

In 2005, 40-year-old Naqsha Bibi survived 63 days buried in the remains of her kitchen in Pakistan-administered Kashmir following a massive earthquake in 2005. She survived on rotten food and water trickling in from a stream.

Meanwhile, a flight carrying more than 100 British nationals left stranded in earthquake-hit Nepal has landed safely back in the UK.

An aid flight chartered by the Government’s Department for International Development (DfID), carrying 120 people, arrived at a private hangar at Stansted Airport at around 3am on Thursday morning.

Some 300 British citizens have been housed in the embassy in the Nepalese capital Kathmandu since the 7.8-magnitude earthquake struck on Saturday.

Earlier Foreign Secretary Philip Hammond confirmed there had been a single British fatality in the disaster, while officials were “urgently investigating2 reports that another Briton had died at Mount Everest base camp.