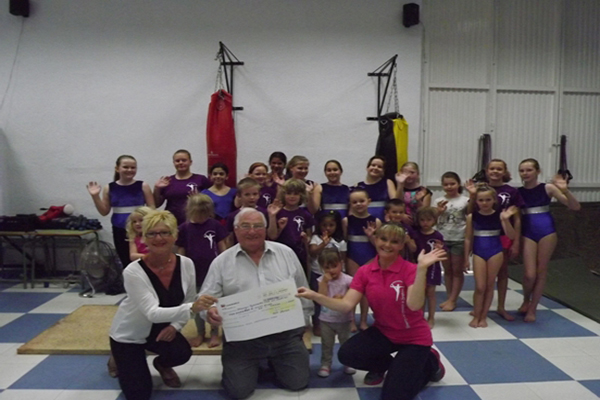 Wednesday last, was April Fools Day but not for The Independent Theatre Group or Stacey’s Gymnastic Club at Sofia’s in Alboleas

In January I.T.G. produced the Pantomime “The Wonderful Story of Mother Goose” and Stacey and her Gymnastic group of children were a part of the Pantomime, undertaking a special routine, by the “Magic Pool”.

As a newly formed group starting from 12 children a year ago, they now have over 30 children, both Spanish and English, taking part and they are always in need of new equipment.   Wednesday was there sponsorship day and I.T.G. presented them with a cheque for €260, being the proceeds of the raffle held in conjunction with the Pantomime. It is hoped that they will raise upwards of € 1600 in total, when all is collected.

Tracey has always been involved in Gymnastics and is now passing on her expertise to children here in the Almanzora Valley, taking them through the various grades, and as she says “getting them off their backsides, away from TVs, Computers, WII, Xboxes etc and getting them running around and enjoying a more healthy pastime”

The Independent Theatre Group is proud to be associated with the group, and wish Stacey and all the members every success for the future.

The photo shows the Group with Jakki Higginbottom of I.T.G. who Directed the Pantomime, Ian Jones, this years President of the Theatre Group passing over the Cheque to Stacey Smith