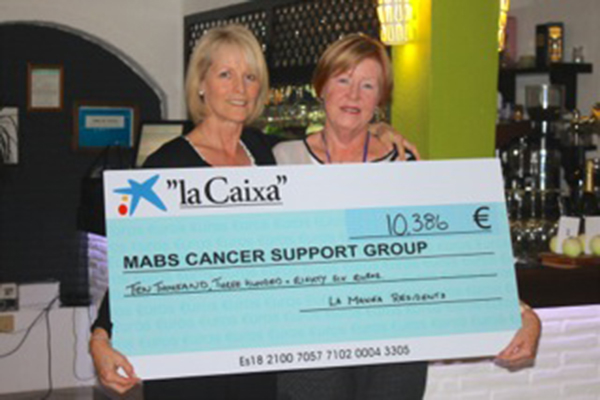 When Helen Holland was about to become Lady Golf Captain at La Manga Resort from Feb 2014 she needed to choose a Charity to support and as Helen’s mother Beverley Taylor is a MABS volunteer, she was invited to attend the opening of the new MABS Centre in San Javier. There, she was able to talk to patients, volunteers and supporters, and was so impressed with what she saw and heard, plus the facilities the Centre could offer, Helen chose to support MABS.

Helen decided she would like to aim to buy a piece of an equipment such as a hospital bed which costs 1500 euros and so the fundraising began. By May the sum raised had surpassed the 1500 euros and a bed was duly bought.

In June, the highlight of her year of events was a White Night at La Finca Restaurant, La Manga Club which was attended by 120 guests including Jacqui Phillips MBE, President of MABS. Including an auction and grand raffle the evening raised a staggering 6000 euros so four wheelchairs were bought.

Fundraising continued until the end of Feb 2015 when the grand total of €10,386.00 was announced.   In addition to the money raised word got around La Manga Resort that MABS also had a Charity Shop which sold clothes and furniture, after which the MABS van made frequent collections from the Resort.

Janet Bell of MABS Mar Menor attended a golf dinner recently for the official presentation of the cheque and said “This is an amazing amount of money and MABS is truly grateful for all the hard work, instigated by Helen, from the residents of La Manga Club”    Janet went on to explain to the diners the work MABS does in the community with carers, drivers, translators, and counsellors. MABS received no funding so is relies totally on voluntary contributions and fundraising.