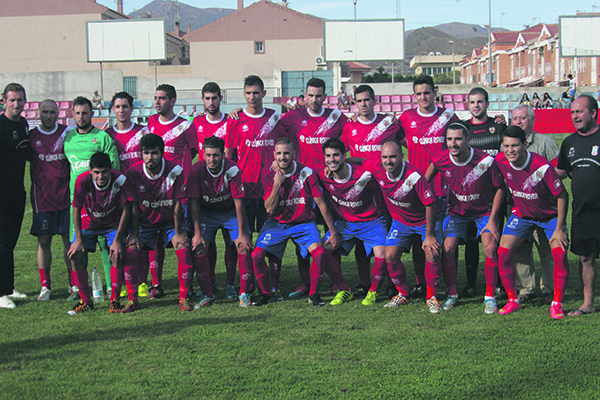 Mazarron FC ended the 2014-15 season on the highest possible note with a 2-1 victory in the second leg of the Primera Autonomica  Play Off Final at home to CD Esparragal, thus securing promotion by an aggregate score of 4-1. An eleven game unbeaten run has seen the team achieve promotion to the Preferente Autonomica for the first time since the 2011-12 season.

Large crowds saw the two legged Play Off Semi Final against CD Juvenia and the Final against CD Esparragal. Mazarron reached the final by the narrowest margin on the away goals rule after a 2-2 draw in Juvenia was followed by a 1-1 draw in the home game. The Final was virtually settled in the first leg at Esparragal when 2 goals by the league’s leading scorer Tolo gave Mazarron a cushion for the second leg at the Estadio Municipal last Sunday.

Tolo was again the match winner with another double, one from the penalty spot, taking his tally to the season to 40 and despite a late Esparragal consolation five minutes from time, Mazarron’s promotion was guaranteed.

Scenes of unbridled joy greeted the final whistle as players and supporters alike celebrated a momentous season accompanied by the newly elected Mayoress of Mazarron, Alicia Jimenez. The success is due in no small part to the fantastic efforts of Club President Jose Rodriguez and coach Javi who was plucked from the junior ranks mid way through the previous season and has put together a team not only capable of winning promotion but also of holding its own in the higher division.

There have been many important contributions to what has been a superb team effort but special praise must be given to Tolo who reached the fantastic total of 40 goals in the season. The unbeaten run at the end of the season also co-incided with the return to the Club of former of captain Juan Andreo who did not appear on the losing side once. Goalkeepers Conejo and Carrasco also made important contributions during the season, each saving three penalties which secured important points for the Club.

The large crowd of Mazarron supporters are now eagerly awaiting the start of the new season in early September.