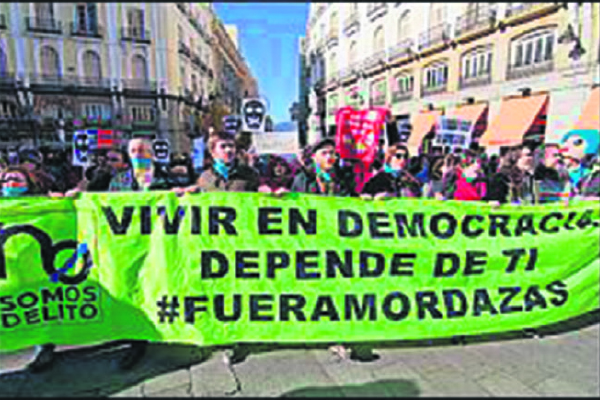 A fine was withdrawn and the case dropped against woman who posted illegally-parked police car photo on Facebook.

A WOMAN who posted a photo of a police car illegally parked in a disabled bay on Facebook has been let off her 800€ fine – largely due to the media repercussion it provoked.

Under the draconian ‘Public Safety Law’, dubbed by most of Spain as the ‘Gagging Law’, the Facebook user – who captioned the picture with, ‘just park where they hell you feel like and you won’t get fined’ – was facing sanction for ‘photographing police officers in the course of duty’ and for ‘unauthorised use’ of said pictures which ‘could constitute a threat’ to their subjects.

The town council in Petrer (Alicante province), when asked how the parking picture on the woman’s personal site could be considered ‘threatening’, said it was ‘a slight on the professional ethics and good name’ of the Local Police, adding that the force was allowed to park illegally if this was necessary to be close to a crime scene.

But MP for the Valencia region Juan Carlos Moragues said Petrer’s tripartite local council was uncomfortable with the fine, especially the prohibitive and disproportionate amount of it, and sent details of the case to the provincial council or Diputación in Alicante asking them for their views on whether it contravened the new legislation.

MPs at the Diputación decided it did not and announced the case would be archived.
Socialist politicians at the Diputación, following the case of the woman’s photograph and caption having initially attracted a fine, appealed ‘urgently’ to the Valencia regional government for it to rule that the ‘Gagging Law’ would not apply in the region, defying the central government.
They have also asked the Valencian government to petition Spanish president Mariano Rajoy’s cabinet for the law to be scrapped.

With December 13 or 20 having been earmarked as possible dates for the general election this year, nearly every other party in the central government has said it will repeal the ‘Public Safety Law’ if it gets into power.