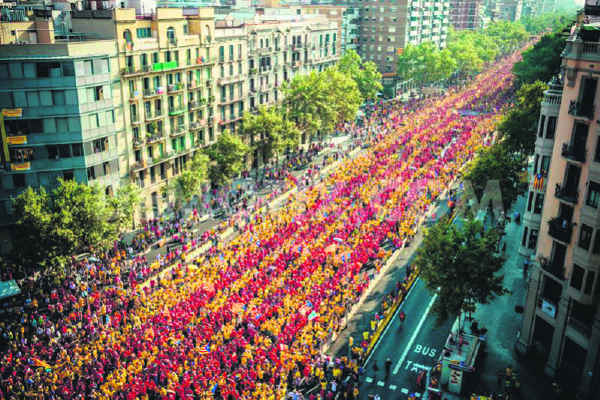 HUNDREDS OF THOUSANDS FLOOD STREETS OF BARCELONA TO CALL FOR INDEPENDENCE

Pro-independence supporters gathered by the hundreds of thousands in Barcelona on Friday afternoon to hold a march that has become an annual tradition on September 11, but which takes on added meaning this year because of upcoming regional elections that could lead to Catalonia’s secession from Spain.

Throngs of crowds in white t-shirts had completely filled the four traffic lanes of Meridiana Avenue by 5.14pm, when the main event of the Diada – Catalonia Day – got started.

As demonstrators chanted “Independence!” and waved esteladas (the unofficial flag of an independent Catalonia), a giant yellow arrow was carried five kilometers by a group of athletes from the northernmost point of Meridiana Avenue to the Catalan parliament, along a route christened Via Lliure (Liberty Road).

Prominent pro-independence politicians marched at the head of the group, including Catalan government official Francesc Homs and the three top candidates in Junts pel Sí (Together for Yes), the secessionist bloc that is running in the September 27 elections: Raül Romeva, Muriel Casals and Carme Forcadell.

FC Barcelona player Gerard Piqué was another famous face on view at the march.

Friday was day one of the campaign to regional elections on September 27, which the regional premier is casting as a de facto plebiscite on independence

Conspicuously absent from the march was Josep Antoni Duran, leader of Democratic Union of Catalonia, a Catalanist party that ruled the region almost uninterruptedly for 37 years in tandem with Democratic Convergence of Catalonia, as CiU.

Through his Twitter account, Duran called on Catalans to “defend the land” using “dialogue, cohesion and common sense.” The CiU coalition broke up in June due to disagreement over the independence drive, which Duran does not support. 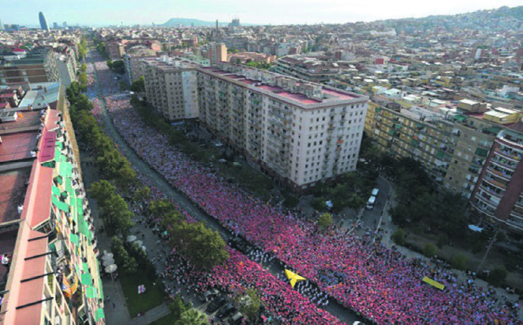 Meanwhile, the Spanish government said that the Diada’s pro-independence acts have become “a campaign event for [Artur] Mas,” referring to the fact that Friday is also day one of the campaign to regional elections on September 27, which the regional premier is casting as a de facto plebiscite on independence.

In a press conference with international media outlets, Mas reasserted that if his Junts pel Si bloc wins an absolute majority of seats in the Catalan parliament, he will feel legitimized to press on with his secessionist drive – even if he does not technically obtain a majority of votes.