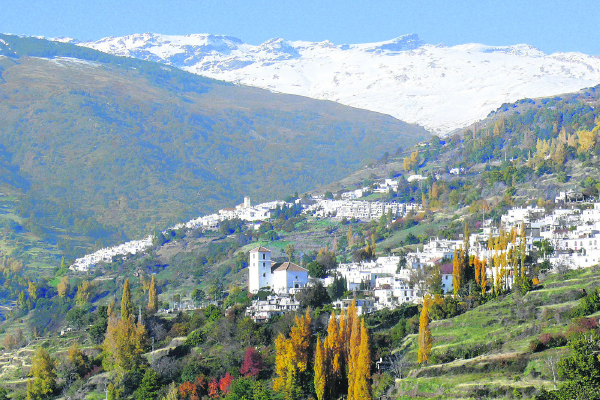 The region of mountain villages known as Las Alpujarras clings to the southern flanks of the Sierra Nevada, cloven by deep, sheltered valleys and gorges which run down towards the Mediterranean. The Alpujarra, as it is popularly known, in the singular, is famous throughout Spain because of its unique mini-ecology. Its terraced farmlands are constantly watered by the melting snow from above, constituting a high-altitude oasis of greenery which stands in dramatic contrast to the arid foothills below. This is ideal hiking terrain for adventurous travellers, provided you take along a tent and well-padded sleeping bags – the average altitude is 4,000 feet above sea level.

The cultural interest of the region lies in its fifty-odd villages, which were the last stronghold of the Spanish Muslims, or Moors. Soon after the Castillians took Granada in 1492, all the city´s Moors were forced to convert to Christianity. Those who refused took to the hills, settling in this remote, inaccessible area. Constant pressure from the Christians led to a bloody uprising, the Morisco Rebellion of 1568, which was ruthlessly crushed out, with the public execution of the leader, Ben Humeya, in the main square of Granada. Soon followed a royal decree expelling from the Kingdom of Granada all people of Arab descent, since the “new Christians”, as the converts were called, were all suspected of being ¨crypto-Muslims¨ in secret…

The villages of the Alpujarra were resettled with some 12,000 Christian families brought by King Philip II from Galicia and Asturias in north-western Spain. However, these unique hamlets have retained their traditional Berber architecture – terraced clusters of grey-white box-shaped houses with flat clay roofs – which is still common in the Rif and Atlas mountains of Morocco. Perhaps the most picturesque villages are the famous trio which cling, one close above the other, to the slopes of the Poqueira Valley, where red peppers and tomatoes are still set out to dry on the flat clay roofs, among the tall round chimney pots. Pampaneira, at the bottom, bustles with crafts shops and restaurants, as does Bubión, half way up the slope, with its massive square church tower standing on a plaza of rough paving stones. But to savour the authentic Alpujarra, go to Capileira at the top of the valley – the name is an Arabic derivation of the Latin word for head or top – and walk down from the road into the lower streets of the village, where the rocky streets, overhanging passageways and sagging, stone houses have still not been remodelled and prettified for contemporary living…

If you stray from the beaten path, you will be sure to catch sight of the region´s abundant wild life, such as the Cabra Hispanica, a mountain goat which roams the mountains in herds and is often seen standing on pinnacles, silhouetted against the sky. But as soon as it flairs the scent of man it will bound up the steepest slopes with amazing speed… The Alpujarra is also famous for its excellent birdwatching – the colourful Hoopoe with its stark, haunting cry, is a common sight. The capital of the region is Órgiva, on the lowlands, and the village of Trevélez – famous throughout Spain for its superb mountain hams, or jamón serrano – is, at over 4,840 feet above sea level, the highest village in Europe, overhanging a fast-flowing river and plunging mountain valley.

One of the many great travel books written about Spain is devoted to the Alpujarra – Gerald Brenan´s “South From Granada”, which recounts the adventures of a young Britisher who, after serving in World War I, walked through Andalucia in search of a cheap place to live and write. He discovered the tiny village of Yégen, where he rebuilt a ruined house (now marked with a plaque in his memory) and lodged some of his friends of the famous Bloomsbury group of London. In his book – written in retrospect, long after he became a well-known journalist – Brenan describes the difficulties of getting such highly-strung aesthetes as Virginia Woolf and Lytton Strachey up the river gorges on mule back, as well as his bucolic existence among the local peasants.