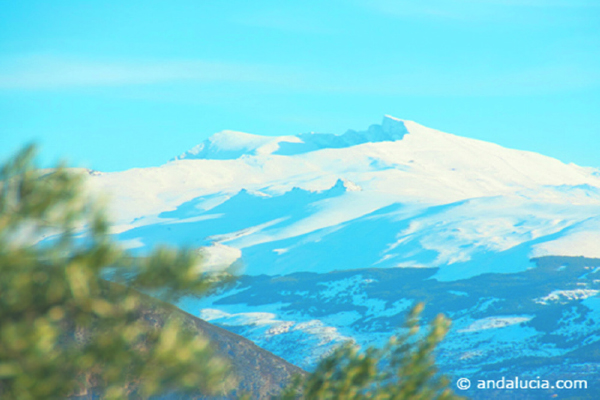 The Sierra Nevada is a dramatic, rugged and extensive mountain range, the highest in Europe after the Alps and the most significant section of the Cordillera Penibética. The protected area encompasses 86,208ha of torrential rivers, sheer-sided gorges, stony scree slopes, glacial lakes between snowy summits and, in the foothills of the Alpujarras, cultivated terraces of almond trees and vegetables. Popular activities in the region include skiing, hiking, mountain biking and summer camps. One can simply travel and discover its fauna and flora, see its lagoons and have an adventure in this vast area of land.

The highest mountain in mainland Spain is the Mulhacen (3482 m), located in the mountains.

There are 85km of slopes of which the highest is the Pico Veleta at 3396m. You can combine a ski vacation with the sun, as the sunny shores of the Costa de Almeria and the Costa del Sol are not far away.

The Sierra Nevada national park covers a part of this mountain range. The park with its variety of landscapes has all the characteristics of the climate of the mountains.

Due to climate variability and height you will find a huge variety of vegetation. From densely green in the valley to small alpine flora and low bushes on the tops. This amounts to more than 2100 species of plants from the 8000 cataloged in Spain. The area is also rich in wildlife, there are more than sixty species of birds who watch over the airspace like the vulture, eagle or king Alpine Accentor. On land reign among others the Spanish mountain goat (cabra montes), foxes, wild boars, weasels and badgers.

The most popular village in Sierra Nevada is well-known amongst snowsports enthusiasts: Monachil being the home of Europe’s southernmost ski resort and the only one in Andalucía. However, the attraction of the villages in this area is not limited to snow, as the majority of the area is part of the Sierra Nevada National Park. Here visitors will find fantastic routes to take on foot or, for the more adventurous, by horseback or mountain bike. This area also has areas ideal for fishing, such as the Coto de Pesca Intensiva Pinillos, located in the Pantano de Canales inside Pinos Genil. Many of these villages have slowly become dormitory villages for Granada city due to their proximity to the provincial capital.

Monachil is a village in Granada province located in the Sierra Nevada national park and site of the southernmost ski resort in Europe. It is also popular with nature lovers as well as skiers and snowboarders.

Pinos Genil is a village in Granada province is divided in two by the river Genil, and is a popular destination for rural tourism enthusiasts and nature lovers.