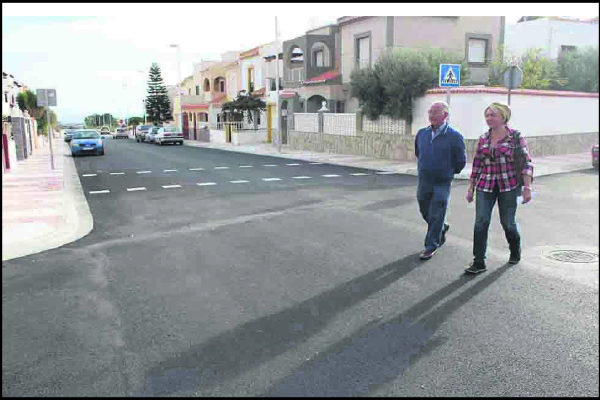 The Mayor of Roquetas de Mar, Gabriel Amat, visited the area to verify the completion of all work.

The mayor of Roquetas de Mar, Gabriel Amat, accompanied by the Deputy Mayor and Councillor for City Management, Eloisa Cabrera, visited the village of El Parador to verify completion of all jobs in seven of its streets, which have been renovated in full.

Throughout the visit, there have been numerous neighbors who have approached the mayor to assess the new look of its streets, mainly by improved lighting. “It’s one of the issues that are affecting more from the government team, because so many streets of the town that needed a replacement for your lighting in order to gain visibility and energy efficiency,” said Amat. “In this sense, in the last month we have completed this type of work in the Avenida Playa Serena, the polygon La Algaida and now, in this particular area of ​​El Parador, but there are many points where we continue to work and in particular One of the core where we will act more in Cortijos de Marin is “, he remarked.

In addition to lighting at El Parador it has undertaken a comprehensive reform of road infrastructure in Fernan Caballero, Carmen Conde, Maria Zambrano, Jardiel Poncela, Gloria Fuertes, Alfonso Paso and Alejandro Casona that have been renewed the steel and reinforced the firm with new paving.

“These interventions allow us to conduct a removal of architectural barriers and improving accessibility as well as the adequacy of sidewalks and crosswalks to accessibility standards”, he explained meanwhile Eloisa Cabrera. “We need to address comprehensively the improvements is the way of updating a municipality for its extension requires a serious work and planned as is being done,” he added.

“The performance has also served to solve a particular problem on the street Alejandro Casona, which adjoins an area of ​​greenhouses and where there was danger for a small ditch on which has also intervened,” detailed the mayor.

The deputy mayor has also “noted the need for this type of renovations that facilitate and increase very significantly the quality of life of our neighbors, as modernized and kept in superb condition urban elements, creating better relations and facilitating our daily becoming residents in those areas and citizens who visit them. ” Reversing the action amounted to 280,000 euros