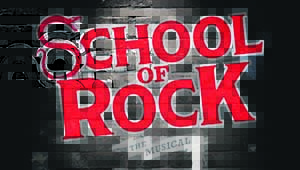 The new School of Rock: The Musical, based on the 2003 film of the same name, celebrates rave reviews from the UK press.

Showing now at the New London Theatre, the stage adaptation has already received huge critical acclaim.  From the likes of The Independent, The Guardian and The Telegraph.

The Independent have labeled School of Rock: The Musical “a quirky hoot with a heart”, adding that the young cast “deserve to be showered with gold stars.”

Calling the show Andrew Lloyd Webber’s “most exuberant show in years”, The Guardian notes its dedication “to the great cause of cheering us all up.”

The Telegraph calls School of Rock “the most enjoyable few hours money can buy,” with the Evening Standard concluding “this is a big-hearted, family-friendly show.”

All the reviews (and there’s loads more) note the brilliance of David Fynn as leading man and unintentional loner Dewey. “He has the nerdiness of the wannabe rocker, suggests that Dewey is an arrested, or at least held-in-custody, adolescent.” The Guardian adds, “and displays ferocious energy without ever upstaging the kids.”

Want to find out for yourself? Tickets for School of Rock: The Musical are on sale now through Ticketmaster.co.uk.