Banned cyclist Lance Armstrong’s fight against a $100m (£79m) lawsuit by the US government has been set for a trial starting in Washington on 6 November.

He is accused of fraud by cheating while riding for the publicly funded US Postal Service team.

The lawsuit was filed by Armstrong’s former team-mate Floyd Landis before being joined by the government in 2013.

Armstrong was stripped of his seven Tour de France titles and banned for life in August 2012. 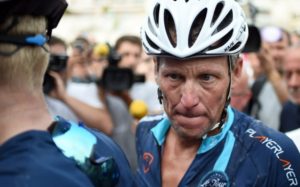