At least four people have died in an avalanche at the ski resort of Tignes in south-eastern France, rescuers say.
The group was buried after the wall of snow swept through an off-piste area, police say.
Some reports say there were nine in the group, including a guide, and that the other five remain missing, trapped in the snow.
However, local police said that the other five may have failed to show up for the session.
The 400-metre 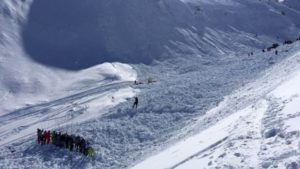 wide avalanche occurred at an altitude of 2,100 metres, and struck at a particularly busy time during half-term holidays.
The resort is popular with British holidaymakers, but local police said the four dead skiers were all French nationals.