Real Madrid head coach Zinedine Zidane says Gareth Bale apologised for his red card against Las Palmas and was disappointed with the incident.

Bale was shown his first red card since joining Real Madrid and his first since 2008 for kicking out at Jonathan Viera before pushing the midfielder to the ground.

It looked like it would result in a first home league defeat in a year for Real until a late comeback saw them snatch a 3-3 draw at the Bernabeu.
Cristiano Ronaldo’s late double salvaged a draw that keeps Real just a point adrift of league leaders Barcelona with a game in hand. 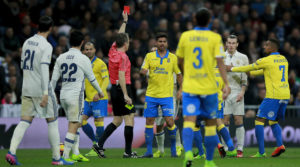