David Haye’s statuesque physique broke down in front of our eyes enabling the ruthlessly exploitative Tony Bellew to punch him out of the ring to a stoppage victory.

A sixth-round Achilles injury left Haye on one leg and, although he proved Bellew wrong by not quitting, he faces a crisis in piecing together a career that has already ended once due to physical problems.

For Bellew’s part; the WBC cruiserweight champion was merciless in attacking the stricken rival whose lifestyle and dedication he had so frequently scorned, eventually pummelling him through the ropes in the 11th round before the towel was thrown in. 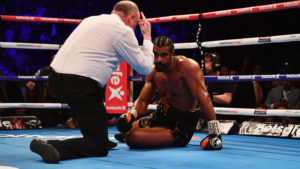