Barcelona head coach Luis Enrique has announced that he will not be in charge at the Nou Camp next season.

Enrique made the shock announcement in the wake of Wednesday night’s 6-1 La Liga victory over Sporting Gijon.

Arsene Wenger insists he is “not looking for jobs at other clubs” after being linked with taking over from Luis Enrique at Barcelona.

Everton’s Ronald Koeman, who was a key man in Johan Cruyff’s very successful Barcelona team as a player, is second favourite, while Pochettino is also among the market leaders.

Although he signed a five-year deal with Spurs in the summer, Pochettino spent over a decade in Barcelona as a player and manager with Barca’s city rivals Espanyol and he reportedly still owns a home there. 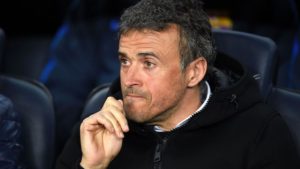