British cyclist Josh Edmondson has told the BBC he broke the sport’s rules by secretly injecting himself with a cocktail of vitamins when riding for Team Sky.

The 24-year-old, who was on the team’s books in 2013 and 2014, also said he had severe depression after independently using the controversial painkiller Tramadol.

Edmondson said the pressure of his selection for a major race in 2014 led to him breaching the UCI’s ‘no-needle’ policy “two or three times a week” for about a month.

Team Sky say legal vitamins and a needle were found in Edmondson’s room, but they did not report the incident because he denied using them, and over concerns he “could be pushed over the edge”.

Edmondson says he confessed to Team Sky at the time but there was “a cover-up” by senior management.

Team Sky are renowned for their robust, no-needle, no-Tramadol stance. 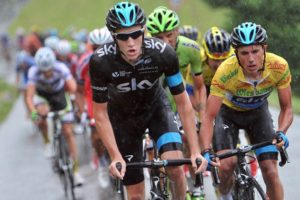