Spanish Police have released striking pictures of a huge weapons haul seized from an organised crime group.
It includes over 10,000 assault rifles, machine guns, pistols, revolvers, and 400 shells and grenades.
The guns and ammunition were seized in January during an operation against firearms trafficking.
Investigators also found an illegal workshop with machinery to manipulate and reactivate weapons, near Bilbao. Five people were arrested.
Cash amounting to 80,000 euros (£70,000 / $85,000) was seized.
Europol said firearms traffickers exploit legal loopholes and legislative differences between EU countries to divert guns from legal suppliers.
Reactivating deactivated weapons is one of Europe’s main sources of illegal guns. 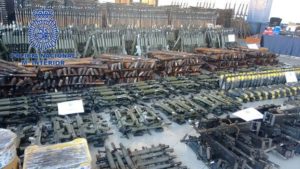