Passengers from six Middle Eastern countries flying to the UK are being banned from bringing laptops and other electronic devices into plane cabins.

The ban, applying to laptops, tablet computers and other items, was announced by the Government on Tuesday and followed a similar ban in the US.

The ban covers devices which are larger than a typical smartphone measuring 16cm by 9.3cm by 1.5cm, which will now have to go in the plane’s hold.

It follows a similar measure announced on Tuesday by the US authorities affecting flights originating in a longer list of eight mainly Muslim countries.

UK airlines operating direct flights which will be hit by the new measures are British Airways, easyJet, Jet2.com, Monarch, Thomas Cook and Thomson.

Affected airlines were informed immediately, but may take a few days to implement the new security measure, said Number 10.

Devices including Kindles and other e-readers will be banned from the cabin, along with hybrid devices such as the Microsoft Surface and iPad Pro, as well as the new Nintendo Switch gaming system.

Some travellers will be forced to pay extra fees for a checked bag if they want to use these gadgets at their destination.

Most smartphones, including the iPhone 7 Plus and Samsung Galaxy S7, will still be eligible to travel in cabin baggage.

Travel trade organisation Abta warned that laptops and tablets are not typically covered by travel insurance policies for loss, damage or theft if they are placed in the hold.

A spokeswoman for the organisation said: “Passengers travelling to the countries affected may wish to consider leaving their electronic devices at home, although this may be difficult for many, especially business travellers and families travelling with children.”

Air industry consultant John Strickland warned that the ban will cause “headaches for airlines and customers” but said carriers have “no choice but to put security first” when official advice is given.

He added: “One unexpected consequence will be the challenge of additional devices with lithium batteries being stowed in the holds which brings its own challenges to safety.”

Transport Secretary Chris Grayling said: “We understand the frustration that these measures may cause and we are working with the aviation industry to minimise any impact.”

The move was ordered by Prime Minister Theresa May on Tuesday in the latest of a series of meetings on aviation security.

Affected airlines were informed immediately, but may take a few days to implement the new security measure, said Number 10.

Announcing the new restrictions, a Government spokesman said: “The safety and security of the travelling public is our highest priority.

“That is why we keep our aviation security under constant review and put in place measures we believe are necessary, effective and proportionate.

“The additional security measures may cause some disruption for passengers and flights, and we understand the frustration that will cause, but our top priority will always be to maintain the safety of British nationals.

“Decisions to make changes to our aviation security regime are never taken lightly. We will not hesitate to act in order to maintain the safety of the travelling public and we will work closely with our international partners to minimise any disruption these new measures may cause.”

Britain has been in close touch with the US authorities over the issue, said the PM’s spokesman.

Asked why the US ban, affecting 10 named airports in eight countries, differs from that imposed by the UK, he said: “We have each taken our own decisions. Our decisions are for us.”

Shashank Joshi, senior research fellow at security think-tank the Royal United Services Institute, said: “It is unclear why only some airlines and countries are affected, given that a potential attacker can easily re-route their journey.”

He added: “The ban is also likely to cause further tension between the US and its Muslim-majority allies, compounding the problems caused by the Muslim-focused travel ban.

“Without clarification, this risks being seen as a form of pointless ‘security theatre’ which causes great disruption with little benefit to aviation security.”

The official threat level for international terrorism has stood at severe, meaning an attack is “highly likely”, for more than two years. 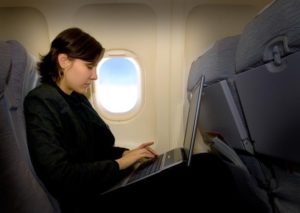