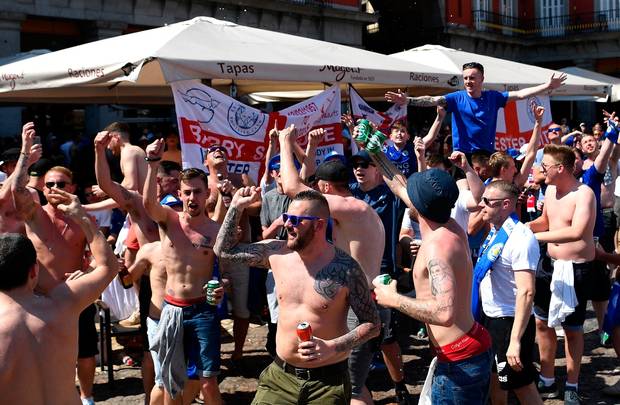 Leicester fans claim tear gas and rubber bullets were fired at them in fresh clashes with Madrid police on Wednesday afternoon.

A group of Foxes supporters were involved in an incident with police in the city’s Plaza Mayor, but accused the authorities of being overzealous.

Fans had gathered ahead of Leicester’s Champions League quarter-final first leg against Atletico Madrid at the Vicente Calderon Stadium.

Social media videos show a blue smoke bomb was let off while objects were thrown at police.

Emma Chetwynd from Tamworth alleged: “We did scarper out quite quickly when the police decided to throw rubber bullets at us. It was provoked but it did get a bit tasty so we left.

“There were five or six big bangs and everyone was saying it was rubber bullets but we left quite quickly.

“It started with a bit of trouble from our fans but they (police) didn’t need an excuse to blast in. It’s any excuse – it’s hard to say – but any excuse and they’ll come in.

“A few people we saw who haven’t been causing trouble have tried to talk to them but they were rudely brushed away.”

Clive Langley, who travelled with son Paul, was in the Plaza minutes before the incident on Wednesday and felt the tension was building, alleging that tear gas was used.

He said: “I could see what was about to happen so I said ‘let’s go and get something to eat’. Sure enough about 10 minutes later it was tear gas and ‘whack, whack whack’. We didn’t see rubber bullets but certainly tear gas.”

However, another Leicester fan, Rak Singh from Oadby, felt any trouble was blown out of proportion.

He said: “They come in and clear out but nothing was happening.

“It wasn’t as bad as people make it. If the police come and rush in you’re going to run out and make it look bad. It was provoking the situation for no reason.”