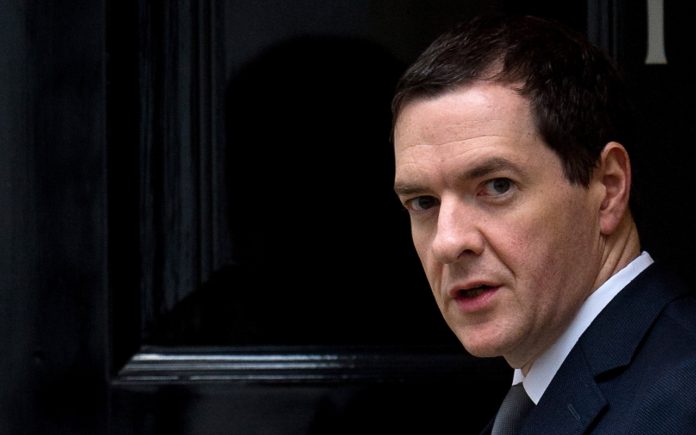 FORMER chancellor George Osborne is to stand down from Westminster politics “for now” at the 8 June election. He revealed the move in the Evening Standard newspaper, where he is shortly to take up the editorship.

Mr Osborne had faced intense criticism for taking on the demanding role of editing a London newspaper while remaining MP for a northern constituency.

Since he was sacked as chancellor by Theresa May last year, Mr Osborne has declared almost £1 million in speaking fees in the Register of Members’ Interests.

In addition he is set to earn £650,000 a year working one day-a-week as an adviser to the US investment giant Blackrock while receiving £120,000 as a fellow at the McCain Institute in Washington DC.

His departure from Parliament comes after Mrs May made clear there would be no early return to frontline politics following his prominent role in the unsuccessful Leave campaign in which he was accused of exaggerating the dangers of Brexit to the economy.

In his letter, Mr Osborne said he was now looking forward to taking on “new challenges”. “At the age of 45, I don’t want to spend the rest of my life just being an ex-chancellor,” he wrote. “I’m very excited about the opportunity to edit the Evening Standard. “I’ve met the team there, and their energy and commitment to this great newspaper are positively infectious.”

George Osborne’s announcement that he is to stand down as an MP is “the right decision”, his Conservative branch colleagues have said. Members of the Tatton Conservatives said they would be sad to see Mr Osborne – who has held the seat since 2001 – quit at the forthcoming election.

Mr Osborne said the move will allow him more time to focus on his new role as editor of the London Evening Standard. It came 24 hours after Prime Minister Theresa May announced the snap general election for June 8.

Mr Dean told the Press Association: “I was with him at the Tatton Conservatives AGM recently when he spoke very well, very passionately, about wanting to continue his political career. “He said he didn’t think his political career was over, and he said how ambitious he was. “He must have had a change of heart – there’s been a little bit of that in the last day or two, though, hasn’t there? “I think the general feeling will be that he’s fallen on his sword a bit – but he’s done the right thing in not seeking re-election.

“He was a good local MP and of course he was powerful. People always want their MP to have a bit of authority, and as chancellor he certainly had that.” Fellow Knutsford town councillor Christine Gray shared her shock that the constituency was looking for its first new MP for 16 years.

She added: “That said, nothing surprises me in politics any more. “This is a relatively secure seat for the Conservatives, so I imagine there will be people queuing up to represent us here.”

Asked if there were any concerns within the constituency about Mr Osborne splitting his time between serving the people of Tatton and of the capital, Ms Gray said: “We have had as our MP the second most powerful guy in the country – the chancellor – so we’re used to him having the high-profile job.

“He has a fine back-up team here too, so he’s always been very approachable for the people of this constituency. “I think he is a very capable man – it’s nice to find a man who can do one job properly these days.”