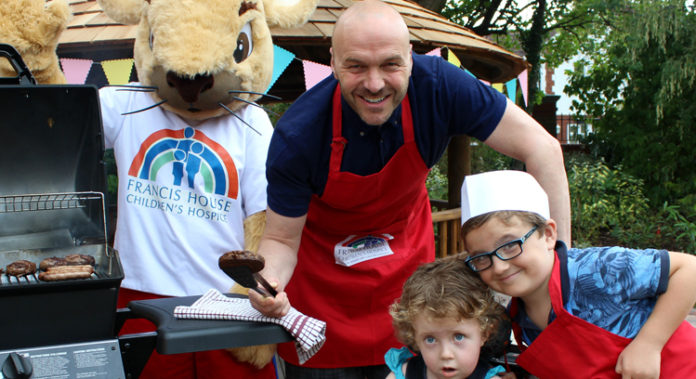 AFTER A quarter of a century of producing more than 300,000 meals for the families of children with life-limiting conditions, the kitchen at Francis House has undergone a major makeover.

In desperate need of refurbishment, the cramped cupboards and small serving hatch have been replaced by modern sleek units. A large island complete with sinks also adds space for food preparation.

Among those in attendance were volunteers and staff including Francis House chef Dean Jenkins, who has worked at the hospice since it first opened in 1991.

“It looks amazing, the size of the kitchen that Dean’s got to work in now is going to make life much easier and give him and the volunteers the opportunity to cook more varied things. It will be brilliant for everyone. I’ve always been a big supporter of Francis House, the work they do here is unbelievable. I’m honoured to be the person to open the kitchen.” said Simon.

Dean from Withington, heads up a dedicated team of volunteers who travel to the Didsbury-based hospice from across the region to help with daily food preparation, serving breakfast, lunch and dinner as well as washing up.

He said: “The kitchen was ready for an upgrade; it was quite big but didn’t use the space well. At the beginning we had domestic ovens now we have catering ovens; we’ve come a long way since the early days.”

Kitchens are often described as the heart of the home, and this is certainly the case at Francis House.

Dean said: “For the children and families that come here, having a mealtime routine in lives that are often chaotic is extremely important. It takes the pressure off the parents, when they come here they don’t have to cook and worry about organising a meal. It really is a great place to work.”

The daily menu caters for all needs and is often adapted if parents have a preferred dish. Family favourites are vegetable hot pot and lasagne.

Restaurant owner Simon knows the joy people get for having a meal cooked for them. He said: “There’s something nice about having a plate of food put in front of you. I’d be quite happy to sit down and someone bring me beans on toast because I haven’t had to do it, but then equally I think there’s something really lovely about cooking food and just saying ‘dig in’.”