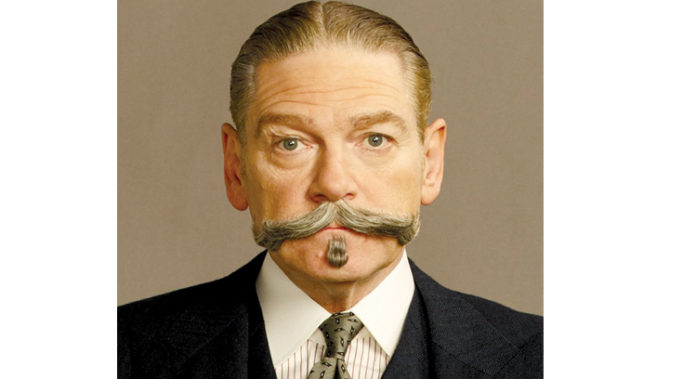 ONE EXAMPLE often given as a sign of getting older is when a film first released when in one’s childhood or teenage years is being remade.

The ever growing list of movie makeovers is a new adaptation of Agatha Christie’s classic tale Murder on the Orient Express.

Starring – as Hercule Poirot – and directed by Sir Kenneth Branagh, the film which is due for release in November, also stars a who’s who of A-listers including Michelle Pfeiffer, Daisy Ridley, Michael Pena and Dame Judi Dench.

Murder on the Orient Express is considered one of the most ingenious stories ever devised. The now well-known story thanks to big and small screen productions revolves around a murder on board the famous train. Belgian detective Hercule Poirot must solve the case, but as he soon discovers and in true Christie tradition there are a number of passengers who could potentially be the murderer.

The cast also includes Johnny Depp, who will play Ratchett, the man who is murdered; Hamilton star Leslie Odom Jr., who is playing Dr. Arbuthnot; and Tom Bateman, who will play the Frenchman Bouc. Lucy Boynton and Derek Jacobi also feature in this lavish production.

Pfeiffer will play Mrs. Hubbard, a glamorous and opinionated passenger with a secret, taking on the role made famous by the equally elegant Lauren Bacall in the 1974 original. Ridley will play Mary Debenham, a working-class woman in love with Arbuthnot.

Dame Wendy Hiller’s cameo role 42 years ago as a member of the Russian royalty Princess Dragomiroff, is in the hands of fellow acting royalty Dame Judi Dench.

There’s no doubting Branagh’s enthusiasm for the project. “Christie’s Murder is mysterious, compelling and unsettling. I’m honoured to have this fantastic group of actors bring these dark materials to life for a new audience.”

Ridley Scott, Simon Kinberg, Mark Gordon and Branagh himself are producing the movie, which began production in London towards the end of last year.

“It is always thrilling for us to see the stellar casting that Agatha Christie film adaptations attract,” said James Prichard of Agatha Christie Ltd., who is executive producing with Hilary Strong.

Christie’s book was published in 1934, and the most famous adaptation is without a doubt the 1974 film version featuring the big stars of the time, and the first of a trio of big screen adaptations that was succeeded by Death on the Nile and Evil Under the Sun. Could any other film of even the last 10 years match the line up of Albert Finney, Richard Widmark, Anthony Perkins, Ingrid Bergman (who won Best Supporting Actress for her role) Sean Connery, Vanessa Redgrave, Michael York, Rachel Roberts, and John Gielgud – among others and alongside those mentioned earlier?