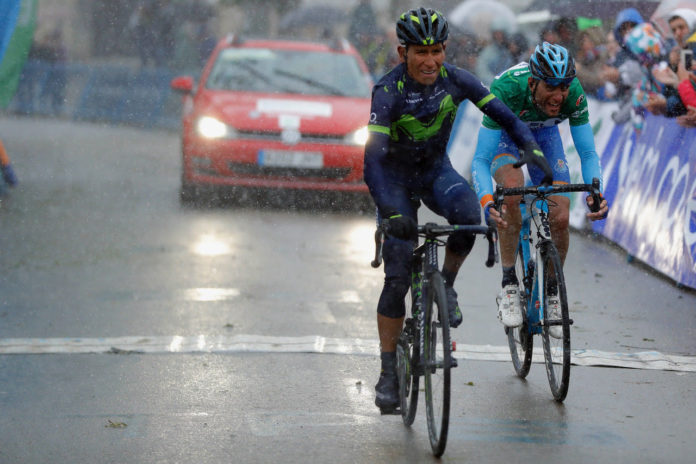 NAIRO QUNITANA is ready to go. The Movistar Team leader at the imminent Giro d’Italia claims his fifth win of the 2017 season on stage two of the Vuelta a Asturias -177km from Soto de Ribera to the Cat-1 Alto del Acebo-, his third on a mountain-top finish this year after success in both Mas de la Costa (Vuelta a la Com. Valenciana) and Terminillo (Tirreno-Adriático).

A victory even more significant after dreadful weather conditions made the whole peloton in Spain struggle to even reach the finishing line.

Calm and sheltered behind leader Weimar Roldán’s Inder-Medellín squad, the Blues counting on Héctor Carretero to lead the way at the long, early break of the day, the squad directed by José Luis Laguía started pushing into the bunch at the 20km-to-go mark, and drove the pace through the initial slopes of the decisive climbs. The attacks from Federico Canuti (AZT) and most notably Sergio Pardilla (CJR) forced the Movistar Team to step up their game. An attack by Dayer Quintana to cut the gap against Pardilla was then countered by Nairo himself, who accelerated with 2.5km to go and took Saturday’s second-place finisher Raúl Alarcón (W52) on his wheel to overtake his brother and storm to the win.

Quintana’s success, his 36th triumph in the pro scene and the 21st win in 2017 for the Movistar Team -an all-time record for the Blues before their first Grand Tour of any season-, takes the ‘Cóndor’ to the 2nd place in the overall standings, seven seconds behind Alarcón, with one stage to go. The Vuelta a Asturias will come to a close in Oviedo on Monday after a short (125km), surely fast and intriguing stage three, including the late ascent and descent of the narrow, treacherous Alto del Violeo (Cat-2).

Nairo Quintana: “I’m really satisfied with how things went, with my preparations and this victory, too. I felt my legs responding well to all that we did before coming back to Europe – we’re on the right path to tackle that big challenge in front of us successfully. For me, coming to Asturias has already been satisfactory. Let’s hope we can finish things off tomorrow in one piece. It was a really cold day, also a dangerous one since we had to go through all those wet descents. We all really suffered, it was tough – yet we’re sort of getting used to these days. It’s been quite a few times now where we had to finish on top of a mountain covered in snow, after getting through foul conditions.

“I just followed the wheels into the first part of the climb, well supported by my team, and when the real selection got formed, I sent Dayer forward to try and tear things apart a little bit more. Once the group was all the strung out I wanted, I went on my own pace, took Alarcón on my wheel and sought for the stage win. I feel ready for what’s to come – let’s just hope the level I reached here is enough to do well in the beginning of the Giro.”