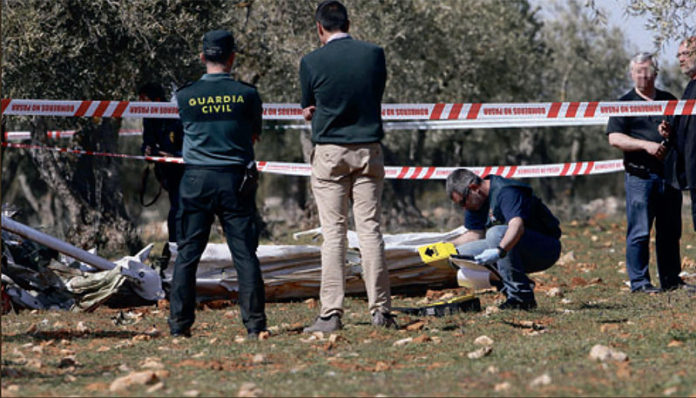 THE three people killed last Saturday when a plane crashed in a mountainous area of Canillas de Aceituno (Malaga) are of German nationality.

Their bodies have been transferred to the Institute of Legal Medicine in Malaga for post-mortems.

Although the identity of the victims has not been formally confirmed, the documents found on the wreckage indicate they came from Germany.

The plane crashed during a planned flight between Muchamiel (Alicante) and Granada when the tragedy occurred, and the three occupants were found dead yesterday by the helicopter team scrambled from their base in Armilla (Granada).

The bodies were initially taken to a heliport used for the extinction of forest fires, located near to El Alcazar, in Alcaucin (Malaga), and later to the Institute of Legal Medicine.

The incident was first reported by the Air Traffic Control Centre to the emergency 112 service about 8.0pm on Saturday evening after losing contact with the aircraft some three and a half hours earlier. They were aware that there were three people on board.

Members of the Guardia Civil Rescue and Intervention Team (EREIM) stayed at the site of the crash sometime after the recovery and subsequent transfer of the three bodies.

A team from the Civil Aviation Accident and Incident Investigation Commission travelled to the scene to establish the circumstances of the crash.

The site was finally declared clear at 4.0pm on Sunday afternoon.