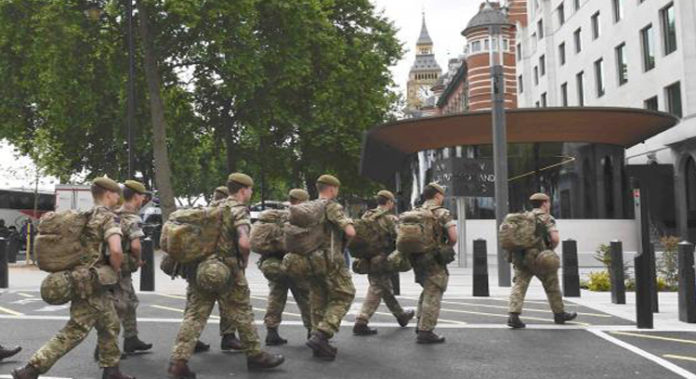 THE DEPLOYMENT of military personnel to assist police in the aftermath of last week’s terrorist attack in Manchester is a significant step change in keeping the public safe.

Steve White, chair of the Police Federation of England and Wales said: “As always, the response of emergency workers in the face of adversity has been second to none.

“The welcome support of the military to free up armed officers and offer public reassurance will no doubt be managed in the same professional, resolute way.

“But, as welcome as this is, we cannot avoid the reasons it is needed at all. There is no ignoring the fact that we, the police, simply do not have the resources to manage an event like this on our own.”

As the service continues to try and keep up with emerging crime types and additional demand, both immediate resilience and resilience going forward will be an area requiring robust debate and tough decisions, he said.

Addressing the Home Secretary at the Police Federation’s Annual Conference recently, Mr White made the point that it used to be a case of ‘not if, but when’ but the reality is now ‘not when, but where next’.

Mr White is clear that visible neighbourhood policing is the basis for helping identify and tackle crime, including terrorism.

He said: “Prevention is better than cure. We know the information to stop these mindless attacks exists within communities and great work is being done to forge strong, valuable relationships to capture this. But it cannot be jeopardised by reducing the contact the police has with the public. Neighbourhood policing – bobbies on the beat, if you like – has never been more important.”

He praised the efforts of all those involved in the response to the attack, including the public, adding:

“While the emergency services, as always, ran towards danger and did what they do best, so too did the people of Manchester, who offered help in countless selfless acts of kindness. This dogged resolve to unite in the face of adversity is what makes this nation great. We cannot lose focus on the challenge ahead – and that is ensuring we have a resilient fully-resourced police service, capable of not just reacting to contain a terrorist outrage but also acting to prevent atrocities in the first place.”