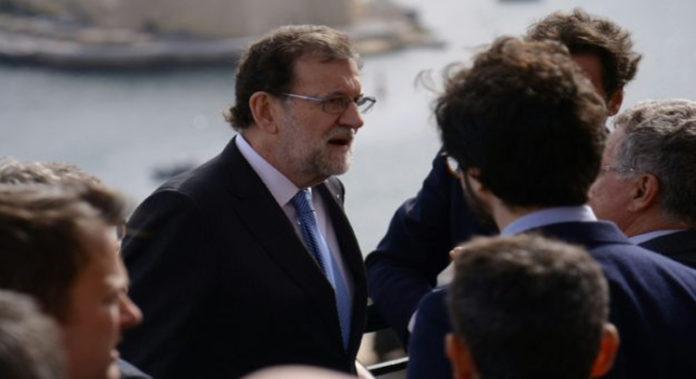 UPON HIS arrival at the special NATO meeting in Brussels, Spanish Prime Minister Mariano Rajoy, stressed that in a democracy such as Spain, no leader can place themselves above the law and adopt decisions that affect national sovereignty outside of Parliament.

He also backed NATO’s involvement in the fight against terrorism.

Speaking at a press conference, Mariano Rajoy guaranteed to the Spanish people that “no-one is going to unilaterally liquidate the Spanish Constitution, national unity or national sovereignty”. “That is my obligation as President of the Government, aside from my own feelings”, he asserted.

What he is proposing to Parliament and the people of Spain, he underlined, is that if it is not agreed to hold a referendum on independence in Catalonia, a law will be approved 24 hours later to “liquidate the unity of a State”. “I would be a bad President of the Government if I were to allow that, and you can rest assured that I am not going to allow that to happen, and I hope that a little common sense can reach those places where it should never have ceased to exist”, declared Mariano Rajoy.

“Fortunately we are a democracy and a civilised country and no leader, however much they may think so, can place themselves above the law and just ignore those decisions that correspond to the people of Spain as a whole”, he added.

Mariano Rajoy stressed the importance of the PSOE [Spanish Socialist Workers’ Party], the Partido Popular (PP) and the largest number of other political forces defending, like most of the Spanish people, unity and national sovereignty, the law and the Constitution in the face of the “pro-independence challenge that some people have proposed in Catalonia”.

As regards the possibility of the government resorting to the suspension of the autonomy of the region as contained in Article 155 of the Spanish Constitution, the Prime Minister said that he doesn’t want “to get ahead of events or announce problems that no-one will like”.

As regards the meeting of NATO leaders, Mariano Rajoy recalled that it is traditional to hold this when a change takes place in the Presidency of the United States. This event served to inaugurate the new General Headquarters of the North Atlantic Treaty Organisation in Brussels and to tackle the issues of terrorism and the contribution of the different countries to the NATO budget and its operations.

Spain currently contributes close to 1% of its Gross Domestic Product to defence work and plays an “important” role in the military missions of NATO, of the European Union and the United Nations and in the International Coalition against the terrorist group DAESH, always “with the approval of Parliament”.

“We are going to continue to support NATO in carrying out its functions and being involved in the fight against terrorism, which has now become, as we are all unfortunately too aware, as we have seen in Manchester just a few days ago, one of the worst problems facing the people of Europe”, maintained Mariano Rajoy.

Working together to defend freedoms and rights, he concluded, “is something very positive for the interests of everyone”.

The Heads of State and Government of the Member States of NATO attended the unveiling of two monuments to commemorate 9/11 and the Berlin Wall and the ceremony to officially transfer the headquarters of NATO before holding a working dinner. Mariano Rajoy was accompanied on the trip to the Belgian capital by the Ministers for Foreign Affairs and Cooperation, Alfonso Dastis, and for Defence, María Dolores de Cospedal.