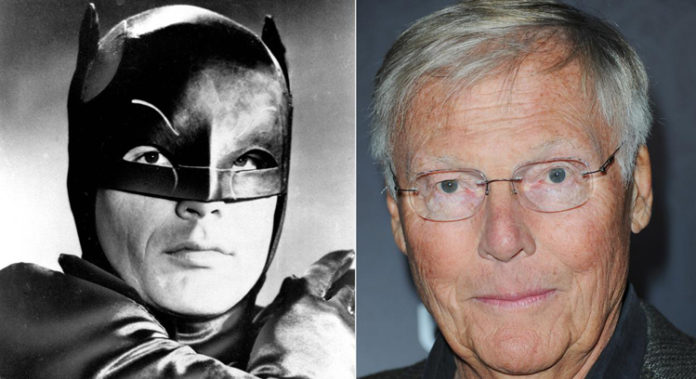 ADAM WEST, star of the popular and campy 1960s “Batman” TV show, died Friday night after “a short but brave battle with leukaemia,” his family said in a statement. He was 88.

In a signature role, West played Bruce Wayne and his alter ego, the crime-fighting, costumed Batman, a popular comics character who came to life on the ABC-TV series.

The actor was born William West Anderson in Walla Walla, Washington, and went on to earn a degree in literature and psychology from Whitman College.

Working as a disc jockey, West developed a dramatic and memorable voice, which he used effectively as the Caped Crusader. As he told CNN in an interview two years ago: “If I pick up a telephone and make an international call, the operator knows my voice immediately, as does everybody else.”

The Batman character “has to be mature enough to have a ward, he’s a mentor or he has adopted a son, so to speak,” West once said.

And, his ‘adopted son’ – actor Burt Ward said: “This is a terribly unexpected loss of my lifelong friend. I will forever miss him. There are several fine actors who have portrayed Batman in films. In my eyes, there was only one real Batman that is and always will be Adam West. He was truly the Bright Night.”

As Batman, West also demonstrated his strong command of vocabulary, delivering wacky one-liners worthy of any manual on gobbledegook in a deadpan style.

“Catwoman, I find you to be odious, abhorrent and insegrevious,” he memorably told one villain.

The list of entertaining purveyors of evil who played opposite West was long and illustrious: actresses Julie Newmar, Eartha Kitt and Lee Meriwether (in a movie spinoff) as Catwoman; Cesar Romero as the Joker; Burgess Meredith as the Penguin; and Frank Gorshin and John Astin as the Riddler.

West secured the role of Batman after he’d been working on films in Europe and returned to the United States to discover the people planning the television show liked his work in a Nestle’s Quik commercial, in which he played Captain Quik, a spoof of James Bond. He’d been hoping for a career in serious roles, but the pilot script to “Batman” changed his mind.

“I knew after 20 pages it was the kind of thing, the kind of comedy, I wanted to do,” he said.
Although he won his share of acting parts over the years, West became typecast, but he didn’t become bitter about it.

“When you wear a mask and funny tights … it gets a little frustrating from time to time,” West said. “I was turned down for a number of parts over the years, I feel, because of that. Wherever I go in the world, there’s such a wonderful rapport with our Batman that it’s neat. People come up and play entire scenes for me unsolicited, but I got to laugh. … How lucky can a person get to be part of something that is a classic?”

Five years ago, West was honoured with a star on the Hollywood Walk of Fame.
“I think I have the record as the actor who has waited the longest to get his star on the sidewalk,” he said.