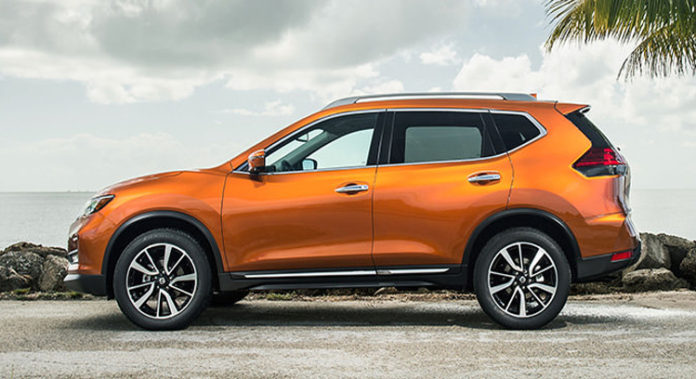 NISSAN’S BIGGEST SUV has received a mild facelift, including a new grille and bumpers, mildly revised head and tail-lights and new alloy-wheel designs.

The five-seat X-Trail’s boot has also been enlarged from 550 to 565 litres with the rear seats in place, although the seven-seat model’s boot space remains the same.

Updates inside include gloss-black air vents and a flat-bottomed steering wheel, featuring new wheel-mounted controls that are said to reduce the amount of time drivers spend looking at the dashboard controls.

The new X-Trail will come with a DAB digital radio as standard, while Tekna models get an eight-speaker BOSE stereo. A new, ‘shark fin’ antenna is said to improve radio reception, while models fitted with satellite navigation get and updated screen layout, which according to Nissan, resembles smart phone apps.

Options include front and rear heated seats, two-tone leather seats and Nissan’s ProPILOT autonomous drive technology. The latter will be available in 2018 and can automatically control the car’s steering, acceleration and brakes when it’s travelling in a single lane on an A-road or a motorway.

Effectively a stepping-stone towards fully autonomous cars, the ProPILOT system can take control in a traffic jam and when the car is cruising at motorway speeds.

The X-Trail will also be available with other driving aids including Intelligent Emergency Braking with Pedestrian Recognition (a form of autonomous emergency braking) and Rear Cross Traffic Alert, which warns the driver if they try to reverse when another vehicle is approaching from the rear.