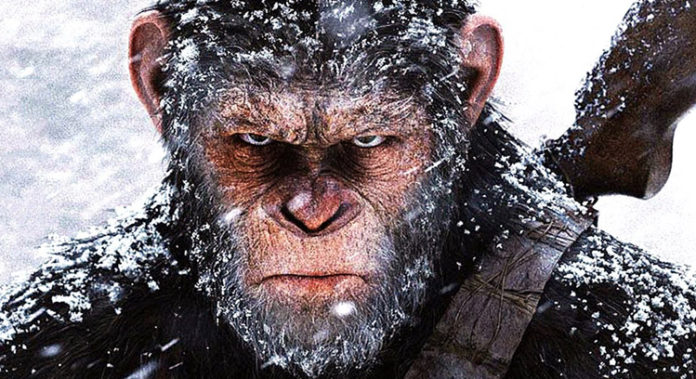 IN WAR for the Planet of the Apes, the third chapter of the critically acclaimed blockbuster franchise, Caesar and his apes are forced into a deadly conflict with an army of humans led by a ruthless Colonel.

After the apes suffer unimaginable losses, Caesar wrestles with his darker instincts and begins his own mythic quest to avenge his kind.

“Apes. Together. Strong!” It’s been the mantra of ape leader Caesar (Andy Serkis) ever since he and his intelligence-boosted simian brethren started forming their own society in the ruins of a virus-ravaged human world. But now he faces the biggest challenge to his extended family’s safety and his own moral code in War For The Planet Of The Apes.

Directed once again by Dawn’s Matt Reeves from a script he wrote with that movie’s scribe Mark Bomback, War finds Caesar dealing with tragedy and then hitting the road (and the beach, and the forest, and the mountains, and a military compound) as he searches for a new home for his clan. It won’t be an easy journey for Serkis’ troubled chimp, either physically or mentally. He’s just broken the core tenet of Ape culture (“ape shall not kill ape”), remember, by killing Koba in the previous outing. And as the human military presses in to take down the ape society, he confronts a new enemy: a commander known as The Colonel (Woody Harrelson), who has no qualms about ditching human ethics to save humanity.

As the journey finally brings them face to face, Caesar and the Colonel are pitted against each other in an epic battle that will determine the fate of both their species and the future of the planet.

War for the Planet of the Apes is released in the USA on July 14th.