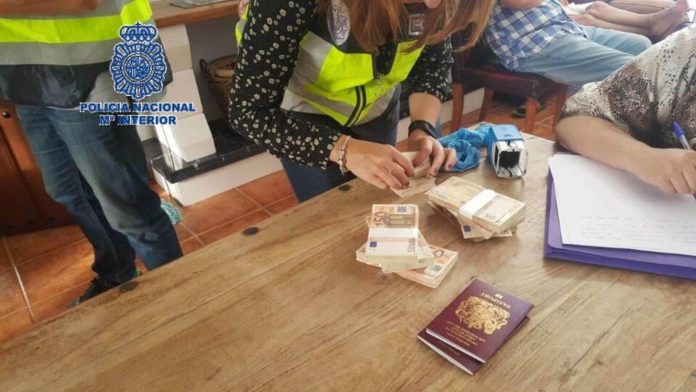 SPANISH POLICE have announced that 36 people – the majority believed to be British – have been arrested in connection with a timeshare scam on the Costa del Sol.

Around 500 victims from all parts of the UK have fallen for the scam and defrauded out of almost £15m.

Those being detained are believed to have made a profit of close to £11m.

Representatives from the Malaga authorities and the police revealed the details stating: “National Police officers have smashed a criminal organisation based in theprovince of Malaga specialising in timeshare fraud. Thirty-six people have been arrested, and another placed under formal investigation but not arrested, on suspicion of fraud, money laundering, forgery and membership of a criminal organisation.”

The spokesman added: “Among those detained are the alleged ringleader, a British man, and two lawyers believed to have been responsible for the money laundering. The suspects offered their customers, all British and timeshare owners, a timeshare holiday product.”

During the police raids on a lawyer’s office and the believed HQ of the gang involved in the town of Velez-Malaga, more than £100,000 in cash, a yacht, 10 designer watches, gemstones and seven vehicles including four high-end cars – one of which was a Ferrari – were seized.

The raids came after police were asked to act on a formal complaint filed by a lawyer acting for 33 Brits who said they had fallen victim to a timeshare scam.

In a statement, Spain’s National Police said: “Initial inquiries were made to determine the place the firm was operating from and resulted in the identification of three companies the fraudulent activity was being conducted from.

“Continuing with their inquiries, police discovered a criminal network composed mainly of six people, namely the main suspect and intellectual author, his wife, his son and his daughter-in-law, all people he trusted who were on the next level down to him, plus two lawyers suspected of being in charge of the money laundering part of the business, and an additional thirty accomplices needed to carry out the fraud.

“The suspects contacted potential victims, all timeshare owners and all British, and offered them the possibility of acquiring a holiday package as well as selling their timeshare to other possible buyers.

“To start the ball rolling, and buy or sell the holiday package, they would ask their victims for a sum of money they termed a deposit. After reaching agreement with the victims, they would dupe them into making bank transfers. They realised after the sale or purchase didn’t go through that they had been duped.”