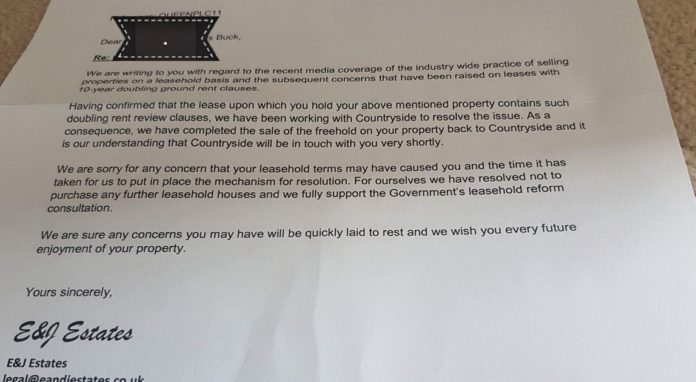 IN what appears to be a positive step forward for homeowners caught in a leasehold trap, property developer Countryside Properties has agreed to buy back a number of freeholds.

Countryside Properties, which sold some of the freeholds on its houses to the ground rent company E&J Estates, has agreed to buy a number of them back, with a view to releasing homeowners from onerous clauses where ground rents double every 10 years.

E&J Estates issued a written apology to homeowners, advising that they had been working closely with Countryside, and as a consequence, completed the sale of the freeholds back to the developer.

In a statement, Countryside said that they have conducted a comprehensive review of properties which have been sold on a leasehold basis and have concluded that the vast majority of these homes carry little or no financial risk to the occupier. However, for a small number of leases, they recognise that the 10-year doubling ground rents increases too quickly and have taken action to address this issue.

Whilst many are hoping this is the beginning of a breakthrough for householders trapped in the “leasehold scandal,” some campaigners have said the deal doesn’t go far enough.

Earlier in the year house-builder Taylor Wimpey set aside £130 million as part of an assistance scheme to compensate homeowners, and is continuing to renegotiate terms of leaseholds with freeholders. Other leading developers, including Persimmon Homes, Bovis Homes and Bellway are yet to follow suit.

The UK government is in the early stages of a consultation on the future of leasehold, with plans to ban the sale of leasehold houses and reduce ground rents on new flats close to zero.