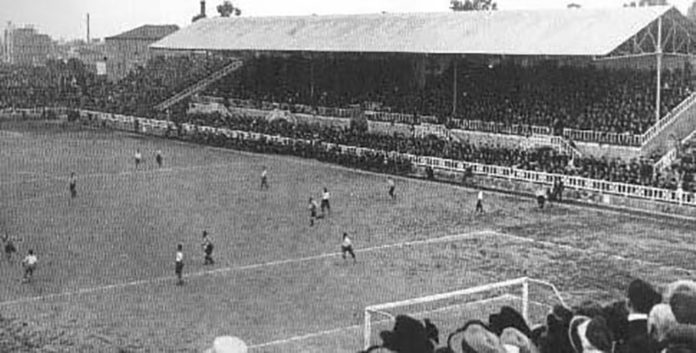 They played seven matches during their three-week tour, starting off with a game against the then-reigning Catalan League champions and Cup holders Barcelona in their new Les Cortes stadium in front of 16,000 fans on Saturday, 20 May.

A British Army lieutenant, Jack Edwards, refereed the game which saw “Saints” lose 2-1 … but it was not the result that mattered, it was the friendliness of the occasion which was attended by several local dignitaries including the Civil Governor, the local Mayor and the President of the Manco – Munidad (local government organisation).

They also met and beat English club Notts County 2-1 in front of a 20,000 crowd in sweltering heat for the Landome Cup which was described as being 2ft 6ins tall, made of silver and worth £50 guineas.

The East Midland club – known as the Magpies – had ventured over to Spain around the same time, having just finished the 1921-22 season in 13th place in Division Two.

They also played Barcelona twice, winning 4-2 and drawing 1-1 as well as sharing four goals with Racing Santander, whose coach at the time was the former Birmingham, Blackburn, Brentford, Middlesbrough, QPR and England winger Fred Pentland. With ten minutes of injury added to the end of this game and with County leading 2-0, the Spanish referee awarded the home side three late ‘dubious’ penalties – they scored two but missed the third and as a result the honours were shared.

References show that getting over to Spain all those years ago was far more difficult than it is today!

For instance, St Mirren took over three days to reach their destination. Boarding the train from Glasgow to London on the morning of Wednesday, 17 May, they continued by coach to Dover, crossed over to France by ferry and, after making two overnight stays, the party finally arrived in Barcelona just in time to play their opening match on the 20 May.

The Notts County party, comprising 13 players, 11 officials and a courier from Thomas Cook Tours, left their local railway station at 7am on the 18 May and, travelling via the overnight ferry and staying in Paris and Toulouse, they eventually arrived in Barcelona late Saturday evening, 20 May.