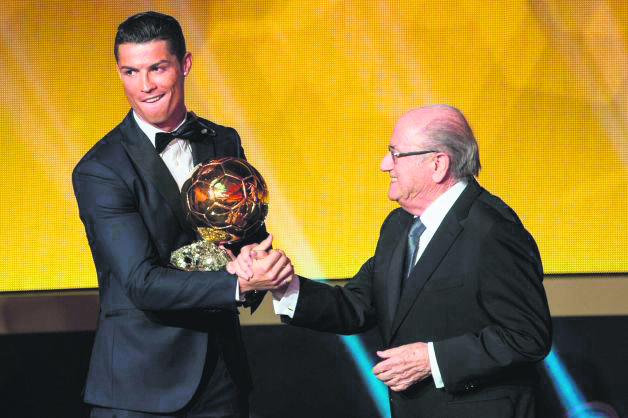 Ronaldo on top for 3rd time

Cristiano Ronaldo has won the 2015 Fifa Ballon d’Or, naming him as the world’s best footballer for the second year in a row.

The Portuguese superstar beat competition from Lionel Messi and Manuel Neuer to secure the award the accolade he has won twice before.

It was a familiar winner in what was in many ways a familiar shortlist for the men’s award. All three of the nominees ply their trade for European giants whose players have regularly featured in these award ceremonies over the years.

The Ballon d’Or was originally created by France Football magazine in 1956, before being merged with the Fifa World Player of the Year award in 2010 to form the Fifa Ballon d’Or as it is now known.

Yet no matter the name of the award for the world’s best player, a small collection of clubs have made recurring appearances in its shortlist.

Over 40 per cent of all footballers to have been named in the world’s top three since 1956 in have played for Barcelona, Real Madrid or Bayern Munich.

The three titans of European football have seen their players on the final shortlist or the over 97 times.

With 44 and 33 nominations respectively, Barcelona and Real Madrid have been the most common representatives in the top three. Only AC Milan, with 23, have more than Bayern’s 20.

Perhaps it should come as no surprise that the planet’s top talents have so often flocked to the three clubs – after all, they are all among the five teams with the most European Cup wins in history. Real Madrid, famously, have lifted the trophy 10 times, Bayern five and Barcelona four.