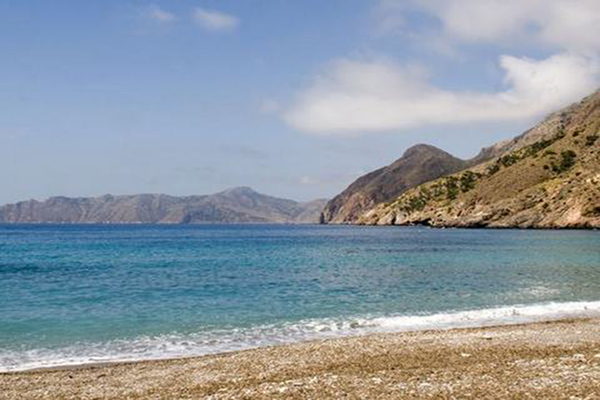 The Beauty Of Cartagena

The port of Cartagena, in the Mediterranean’s Costa Cálida, has been prized since Carthaginian times. Thanks to its strategic position on the Murcia coast, it has been inhabited by several cultures which have left their mark on its artistic heritage. A tour of the place and its museums will draw us into the history of a city closely tied to the sea. 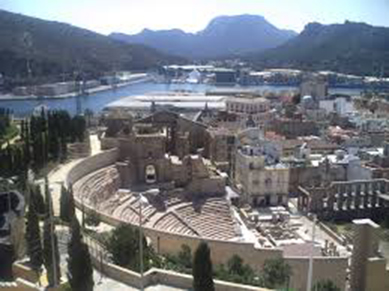 This maritime enclave was already known to the Carthaginians and Romans, and its name today comes from the Latin, Cartago Nova. Cartagena was under Arab domination until Ferdinand III ‘the Saint’ re-conquered it and incorporated it into the kingdom of Castile. Its port played a key role in the War of Succession and the Peninsular War.

The rich Carthaginian heritage spreads to the shores of its marina. The Muralla del Mar (‘Sea Wall’), built by Charles III (18th century), delimits the old quarter. Overlooking the Mediterranean there is an element which is clearly connected with the sea: the prototype of the submarine by the inventor from Cartagena, Isaac Peral. In addition, the National Museum of Underwater Archaeology ARQUA (at Paseo Alfonso XII, 22) houses the National Centre for Underwater Archaeological Research. The findings on display reveal aspects of naval construction, trade and navigation since ancient times. 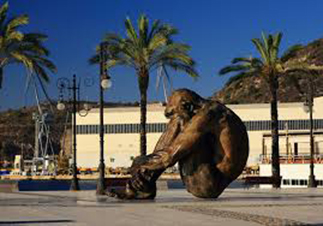 The entrance to the city centre is dominated by the Town Hall, a gem of modernist architecture dating from the early 20th century. The Old Cathedral is located on the Camino del Parque Torres (behind the Muralla del Mar wall). This is the oldest place of worship in Cartagena (13th century), and stands on the remains of a Roman theatre discovered in 1987. This construction dates from the first century A.D., and together with the theatre in Mérida, is one of the most important in Spain. The items found on this site can be seen in the Museum of the Roman Theatre. 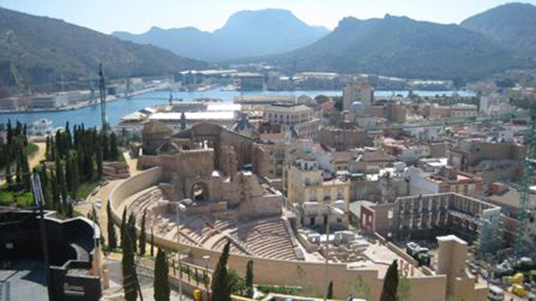 Other examples of Roman splendour to be seen in the city are the archaeological site of El Molinete, the Morería Baja colonnade and the Byzantine Wall, which –despite its name– is also Roman. Particularly worth mentioning are the Augusteum and the Decumanus. The first contains the remains of the old forum, whose importance as a public building can be seen from the luxurious marble floors on display at the site. The second can be visited on the site adjoining the Roman Forum quarter, a key centre for visitors to the city, containing the different rooms in the city’s Roman baths. The Casa Fortuna, built in the first century B.C. and belonging to a wealthy family, shows what daily life was like at the time of the Roman Empire.

The Torres park is the site of the Concepción castle. Standing atop a hill, it served as a fortress to Carthaginians, Romans, Visigoths, Arabs and Castilians, and now houses the History and Mediaeval Cartagena Visitor Centre. Indeed the city has always had numerous defensive military buildings. A good example is the Navidad Fortress, built in the mid-19th century and today the Visitor Centre for the Defensive Architecture of Cartagena and the Mediterranean. Also worth visiting is the Refuge – Civil War museum, a series of galleries which were used as protection from aerial attack throughout the conflict. (More information at http://www.cartagenapuertodeculturas.com/)

The best way to learn more about the Modernist architecture of Cartagena is to take a walk along the Calle Mayor, which leads off the Plaza del Ayuntamiento square, and around the surrounding area. Here visitors will find the houses of Cervantes and Llagostera, by the Cartagena architect Victor Beltrí, with their characteristic glassed-in balconies, worked in iron with bronze reliefs of allegorical figures. Other representative buildings of this artistic movement include the Casino, the Gran Hotel, the railway station, and the houses of Maestre and Dorda, all elegant monuments to the bourgeoisie which remain as evidence of the area’s economic development, based on mining and industry, in the late 19th and early 20th centuries. More aristocratic are the palaces of Aguirre (whose adjoining modernist building is this side of the Regional Modern Art Museum MURAM) and Pedreño, one in the modernist and the other in the neoclassical style.

The Punic Wall stands on Monte Aletes, one of the five hills surrounding Cartagena. This is the location of the Visitor Centre for this site, dating from the third century B.C. 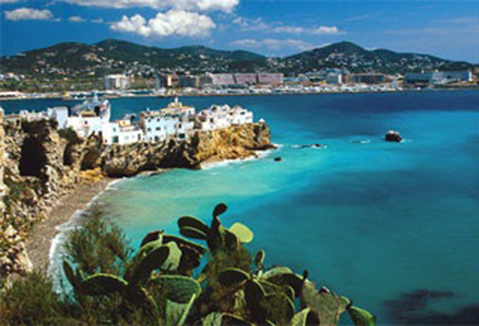 Adjoining the historic walled centre is the Military Arsenal, whose construction was concluded during the reign of Charles III. The walls here have the only surviving entrance gateway in the city. More interesting items from the history of Cartagena can be seen in the Naval Museum, located in the old Naval Offices in Paseo de Alfonso XII, which contains an exhibition of old maritime navigation instruments, maps and navigation charts, as well as models of ships of all kinds. The fishing quarter of Santa Lucía is also well worth visiting.

The city of Cartagena also has a variety of key cultural events each year, such as the world music festival known as the ‘La Mar de Músicas’ (Sea of Music).

Other highlights include the historical festivities of the Carthaginians and the Romans in the second fortnight of September which commemorate the Punic foundation of the city, and the Roman reconquest.

The wide variety of landscapes of the Region of Murcia produces a rich selection of different ingredients from the farmlands, the sea and the interior. In Cartagena, the star dishes are products preserved in brine, fish, rice dishes and paellas. The abundant salt flats of the Mediterranean are used for salt to prepare food in brine (particularly tuna, mackerel and bullet tuna) and fish such as gilthead sea bream baked in salt. The calderos, (casseroles) with grey mullet, monkfish, grouper… consist of rice cooked in fish stock and accompanied by a garlic mayonnaise known as ali-oli. Fig bread is a regional speciality, and Cartagena’s typical asiático, made from condensed milk, cognac and cinnamon, is the ideal accompaniment to coffee.

To enjoy all the different types of cuisine in Murcia, the best idea is to head for the northwest of the region, in order to visit the Sierra de Moratalla, Caravaca de la Cruz and Calasparra, whose rice is the only one in Spain with its own Designation of Origin. This is definitely the star product in a long list of typical dishes, such as rice with snails, or in a stew with celery and turkey. La Vega del Segura leads to towns and villages such as Cieza, Archena (with a spa centre) and Molina del Segura (with a first-rate golf course), where visitors will find such delicacies as green asparagus, hearty chard soup, and rabbit with chestnuts. The area known as the Altiplano in Murcia (in the north) is home to such monumental towns as Jumilla and Yecla. These towns also have wines with their own Designation of Origin. The typical gazpachos (seasoned unleavened bread crumbs) and pulses are served as accompaniments to game dishes. The area’s fertile farmlands produce a wide range of vegetables, which are perfect served with the delicious local sausages and cured meats. The Parador hotel in Puerto Lumbreras, and the towns and villages along the Costa Cálida (Águilas, Mazarrón, San Pedro del Pinatar…) are home to interesting monuments from the area’s rich heritage, as well as exceptional facilities for nautical sports, beaches, and a delicious cuisine.