The two accountants behind the bungle that saw La La Land accidentally awarded Best Picture at the Oscars have been sacked by the Academy.

A spokesperson for the Academy Awards has confirmed that PricewaterhouseCoopers accountants Brian Cullinan and Martha Ruiz would no longer be involved in Hollywood’s most prestigious awards ceremony.

Warren Beatty and Faye Dunaway presented the Best Picture Oscar prize at the Dolby Theatre in Los Angeles on Monday but were given the wrong envelope, so mistakenly announced that La La Land had won the night’s most coveted honour instead of Moonlight.

Oscars organisers have also apologised to an Australian producer whose photo was incorrectly used for the in memoriam tribute. 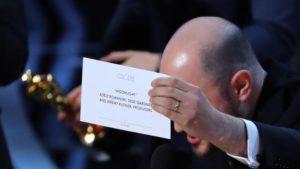