The First Minister said Scottish people must be given a choice between independence and ‘hard’ Brexit – and that the new referendum should be held between autumn 2018 and spring 2019.

That could see a second independence vote take place as early as autumn 2018 – just four years on from when Scots voted by 55% to 45% to stay part of the United Kingdom.
Speaking at her official residence, Bute House in Edinburgh, she said: “In my view it is important that Scotland is able to exercise the right to choose our own future at a time when the options are clearer than they are now, but before it is too late to decide our own path.”

A UK Government spokesman responded to the announcement, saying that a second Scottish independence referendum would be “divisive” and “cause huge economic uncertainty at the worst possible time”. 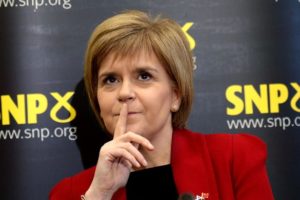