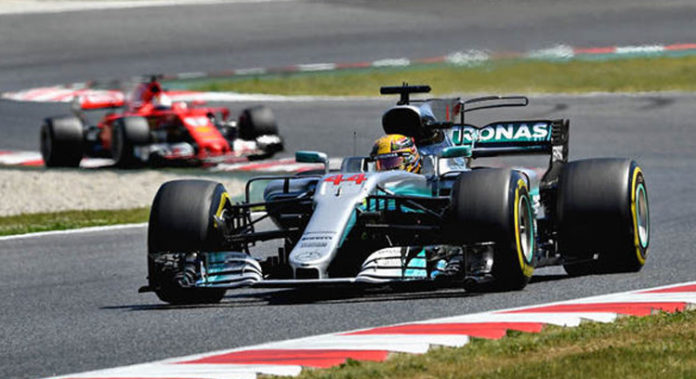 AFTER THEIR thrilling duel for victory at the Spanish Grand Prix, Lewis Hamilton and Sebastian Vettel disagreed with who was to blame for the wheel-banging moment which nearly ended the fight prematurely on lap 38.

With strategy key to the race, it was vital Vettel emerged ahead of Hamilton from his final stop as he was finishing the grand prix on the slower, but more durable, medium tyre. Hamilton behind had taken on the soft tyre at his last stop after Mercedes flipped his strategy earlier in the contest, a response to Vettel snatching the lead at the start.

As Vettel exited, the pair entered Turn 1 wheel to wheel, Vettel on the inside and Hamilton on the outside. Vettel took the inside line and then drifted across the corner – taking the normal racing line – while Hamilton held firm, with the pair banging wheels. Hamilton bailed out across the kerbs and had to slot in behind the championship leader.

Though Hamilton would later catch and overtake Vettel for the win, he complained he had been far enough ahead of the Ferrari driver to expect the championship leader would give him space on the inside.

Speaking on the podium afterwards, Hamilton said: “I think in the heat of the moment it’s difficult to know from the outside view what it’s like. I felt I was ran out of road and I was alongside, it was definitely close but again as I said, that’s how racing should be and I loved it, I wouldn’t change it for the world.”

Vettel then said: “Then he came out and I was a bit surprised when we came out that is was already so close, a love tap. I don’t know if we touched but I managed to stay ahead so it was really close.”

The two men spoke in good spirits on the podium and in a respectful atmosphere that has been a common theme of their title battle so far this season.