In May 1940, Germany advanced into France, trapping Allied troops on the beaches of Dunkirk.

Under air and ground cover from British and French forces, troops were slowly and methodically evacuated from the beach using every serviceable naval and civilian vessel that could be found.

At the end of this heroic mission, 330,000 French, British, Belgian and Dutch soldiers were safely evacuated.

Nolan wrote the story with the intention to tell it from three perspectives – the air, land and sea.

Efforts were made to create suspense solely through details, as the script contains little dialogue. 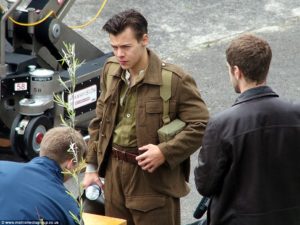 Yes, you didn’t misread the cast list. It really does include former One Direction star Harry Styles who got his part after successfully auditioning with hundreds of others.

There were no pop-star luxuries for Styles on set. His first day on the beach very much set the tone, wind sandblasting his eyeballs, rain chilling him to the bone. Then he had to wade into the freezing-cold sea.

“The toughest days were the ones in the water,” Styles says. “But at least it meant you didn’t have to act cold. By making it real and having things blow up around you and stuff, you get those natural reactions.”