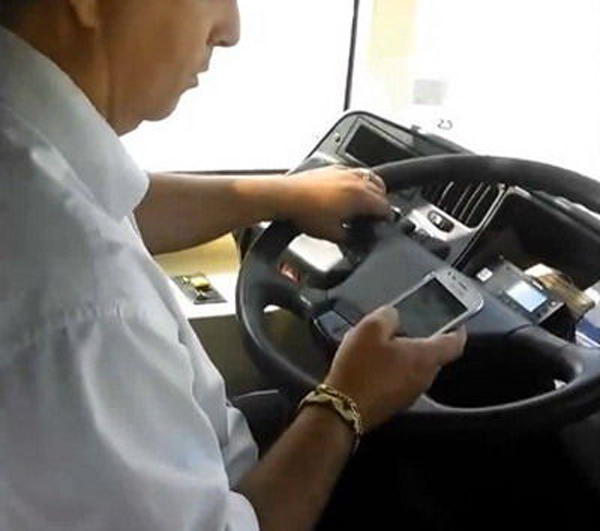 A passenger on a shuttle bus, running between Barcelona airport and the city centre, caught the driver on video, sending WhatsApp messages on his mobile phone while driving through heavy traffic.

The Aerobus shuttle bus was completely full of passengers who had got on at Terminal 1 in the El Prat airport in Barcelona, Spain. The service runs on a regular basis between the airport and the Plaça Catalunya, a public square and transport hub in the center of the city.

Several passengers on board the bus initially spotted the driver counting money when he should be paying attention to the road and started to video him. They then noticed the man using his mobile phone to send messages as he manoeuvred the bus through heavy traffic, a highly dangerous act when driving, and caught him doing that on video. As can be seen in the video above, he was using one hand to drive, and the other to send the text messages using WhatsApp and only barely glances at the road.

Apparently some of the passengers, on noticing he was involved in texting, asked him to please stop, but the driver ignored them. Eventually the driver noticed in the rear-view mirror that someone was actually filming his actions and finally put down the phone and concentrated on driving the vehicle.

The bus driver is now facing disciplinary action for his deeds and the bus company, SGMP, has opened disciplinary proceedings against him.

According to the Spanish daily newspaper El Periodico (Spanish language), Manuel Plasensia, head of communications for SGMP, stated that this incident was “regrettable” and “unusual,” saying, “This behavior is considered as serious misconduct in our driver manual.”

In his media statement, Plasensia apologized to the passengers of the bus for the actions of the driver.