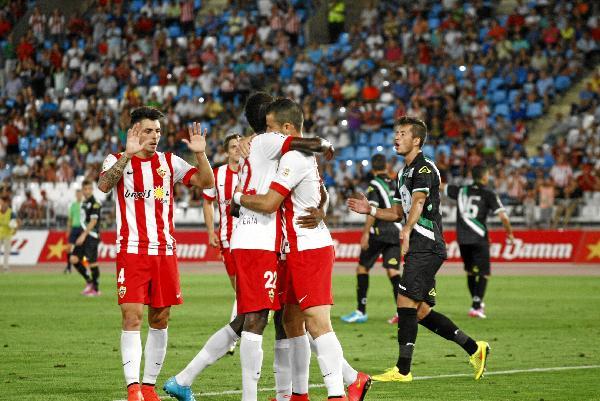 The Red and Whites go into the game knowing the fans eye a victory!

The rivalry between Almeria & Cordoba goes back many years with some fantastic tussles in the 70s but the two sides have never met in the top flight so expectation is high for both sets of fans.

Both sides have only one point from the opening two fixtures, for Almeria it was a home draw against Espanyol on the opening day and Cordoba drew with Celta last time out, the pressure on both coaches will be to get his team playing tonight as there are certainly no easy games in La Liga but this has to be seen as a potential win for both camps.

Almeria look to line up similar to the defeat in Getafe with Tomer Hemed leading the line & Edgar down the left providing some flair, late fitness tests will be given to Thievy, Ramon Azeez and Jonathan Zongo after returning from international duty.

Cordoba who are currently coached by ex Barcelona and Chelsea defender Albert Ferrer have potential issues with Caballero and Jose Carlos both have anterior cruciate ligament ruptures that will keep them out till late Novemeber.

Cordoba also have ex Newcastle United Striker Xisco to call upon if needed, born in the Mallorcan capital Palma the small stirker failed to make an impact at Newcastle after sealing a move from Deportivo la Coruna. After scoring on his debut in a 2-1 defeat against Hull City he only played a further 8 games in the black and white stripes for the Magpies before a move back to Spain.

If you are going to the game let us know your thoughts via twitter @expatgoals!!!

Match report to follow after the game at www.expatgoals.com