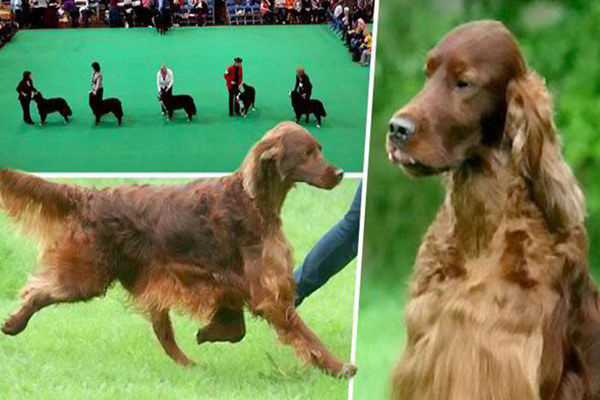 POLICE are investigating claims an Irish Setter was killed after being fed cubes of meat laced with POISON.

Three-year-old Thendara Satisfaction, better known as Jagger, collapsed and died after returning to Belgium from the prestigious Crufts competition on Friday.

Jagger had ranked second in his class at the world’s largest dog show the day before.

Owners Dee Milligan-Bott and Alexandra Lauwers now believe their prize-winning Irish Setter was fed poisoned chunks of met while attending the dog show, at the NEC in Birmingham.

Police in Belgium are investigating the claims and a full toxicology report is expected next week.

She said: “All the dogs were all running and playing together and Jagger seemed a bit tired, unable to keep up with the others.

“Three or four hours later after getting back to Belgium he collapsed and by the time the vet arrived he was dead.

“The post-mortem showed that two or three different poisons were used and that it is likely it was administered on Thursday morning; we’re now waiting for exact toxicology reports.

“Whoever did this knew what they were doing, trying to get exactly the right type of poison with a slow release.”

Jealousy over Jagger’s podium finish is the most likely motive for murder, Ms Milligan-Bott told the canine website.

She added: “There would have been windows of opportunity for someone to feed Jagger something at Crufts.

“It’s been suggested that someone’s really got it in for us, and to not let it get to us. There do seem to be too many coincidences.

“You go to shows trying to win, and one of our dogs is on a roll at the moment, and our kennel had a good day at Crufts on Thursday.

“We’re very proud of our record and maybe some people aren’t happy.

“But there’s no excuse for this. Sometimes you can’t prove anything but you know in your gut what has happened and that something very untoward is going on.”

The Kennel Club, which organises Crufts, said it was unclear what had happened but the group would support the police throughout their investigation.

“We are deeply shocked and saddened to hear of Jagger’s death and our heartfelt sympathies go out to his owners,” a spokesperson said.

“We are in contact with the owners and will do all we can to support them at this sad time.”