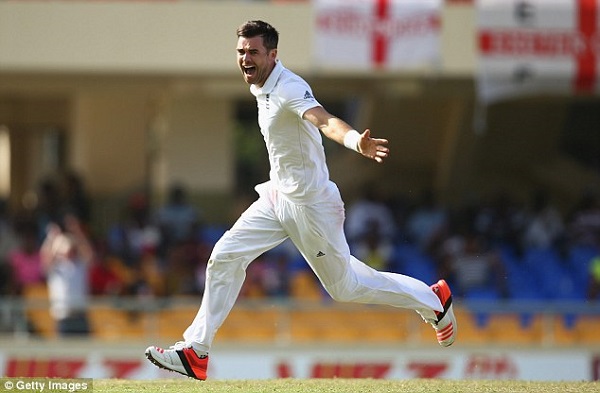 Fast bowler Jimmy Anderson made cricket history in the Caribbean on Friday by beating the great Sir Ian Botham’s all-time England wicket-taking record with his 384th victim in his hundredth Test.

Anderson’s marquee moment in his landmark Test arrived in his 21st over when, crucially for his team, he had West Indies captain Dennis Ramdin caught by captain Alastair Cook after a partnership of 105 with Jason Holder had frustrated England. 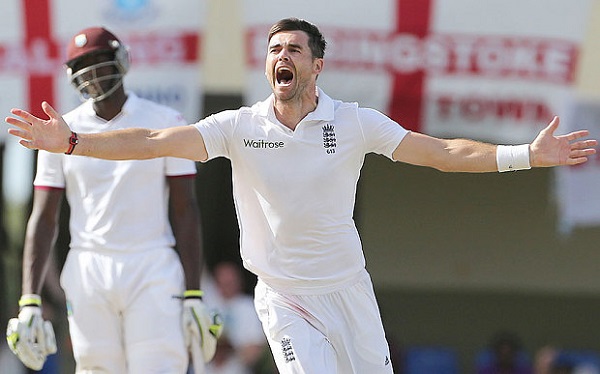 Botham’s record had been equalled much earlier in the day when Anderson had Marlon Samuel caught in the gully by James Treadwell.

It had been a long wait until the final day of the first Test against the West Indies for Anderson’s large group of family and friends watching from a box high in the stands of the Sir Vivian Richards Stadium outside St John’s for Anderson to match or better Botham’s feat.

Anderson has with him parents Michael and Catherine, wife Daniella and daughters Lola and Ruby as well as agent and former county cricketer Luke Sutton and his wife and family, Sutton’s Activate management assistant Gaia Bursell, and Anderson’s friend Greg James, a BBC Radio 1 DJ.

They had an agreement between them not to comment about Jimmy’s record breaking until it had happened.

Speaking to Sky Sports after the match, Anderson admitted: ‘I’m hugely proud. It is great to have my family here as well and taking over from an English legend is a hugely proud moment for me.

‘My immediate emotion was that we were back in the game. We opened up an end and were hoping to get the win.

‘I know my game now. When I started I didn’t have a clue. I ran up, shut my eyes and just bowled as fast as I could. I’ve developed skills over the years that stood me in good stead.

‘It’s not been a target, I love taking wickets and playing for England and that’s all I’m worried about. You pick up milestones along the way. It’s a huge moment for me as well playing in my 100th Test this week. It’s a dream come true to play for England, let alone playing 100 Tests.’

There had been great expectancy since Anderson started bowling shortly before lunch on the second day of the four wickets needed to own outright one of English cricket’s most prestigious records.

Not only from the family party but also Sky pundit Botham, watching from the TV commentary position. He has an expensive case of wine waiting for Anderson back home.

Botham said: ‘It has been a privilege to watch him close up all these years and commentate on a career that I believe still has a few more miles in the tank. I expected to past 400 now and set an English record for the ages. 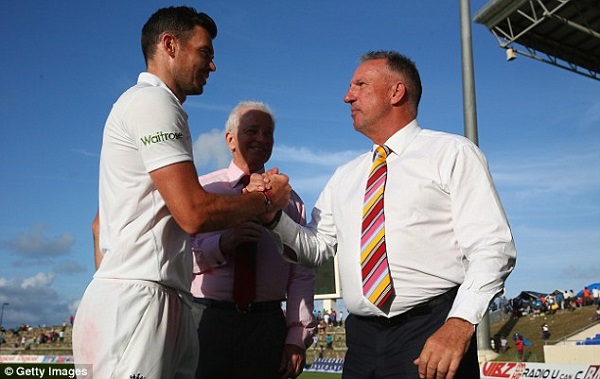 ‘I’m glad I was here in Antigua to watch him do it. I’ll be sharing a glass with him at some point and having a chat about his fantastic achievement.’

But it still took some doing on a flat wicket that offered little assistance to the pacemen.

Only two Anderson wickets came in the West Indies’ first innings when the leading bowler was surprisingly sparingly used. And he failed to add to that tally in the seven overs he bowled on Thursday. But that iconic 383 wicket was finally reached on Friday morning as the West Indies struggled to cope with England’s varied attack.

Former England captain Freddie Flintoff was also quick to have his say on his former team-mate’s landmark achievement.

‘However, he could end up being one of the best ever to play Test cricket … put up there with the likes of Glenn McGrath, Wasim Akram, Dennis Lillee.

‘I think that will be an amazing achievement for Jimmy… and it’s hard not to be happy for him as well, because he is such a good lad. 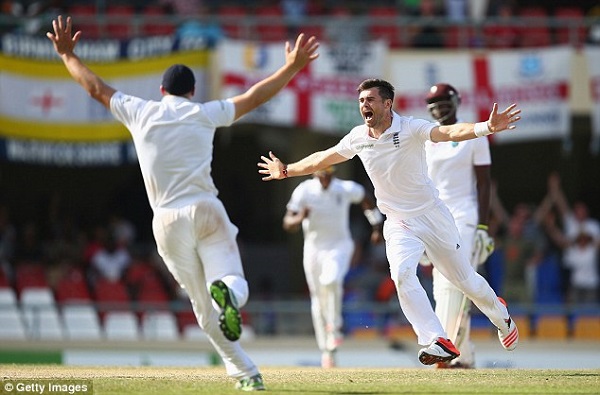 ‘He’s a lad from Burnley [who has become] England’s best ever bowler. I can’t imagine he wants to stop there (either).’

Anderson still has 13 overseas bowlers ahead of him in the world Test wicket taking pantheon. Muttiah Muralitheran with 800 is unsurpassable as is Shane Warne’s 708 and Anil Kumble’s 619.

But Anderson, who could easily play another 30 Tests according to astute judge Michael Vaughan, has enough time on his side to reach sixth in the global list by overhauling Kapil Dev’s total of 434.